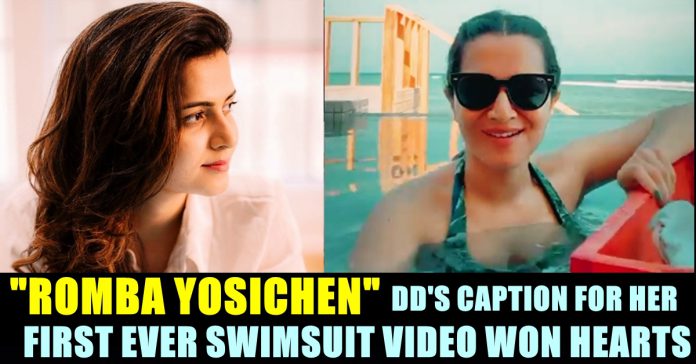 Popular anchor Divyadharshini Neelakandan who is known for hosting several shows in Vijay Television has been engaging her Instagram followers with her vacation posts from Maldives. She who is currently enjoying 2 million followers in the photo/video posting social media platform, won the hearts of her followers with a caption she added for her swim suit video. DD recently grabbed the attention of the netizens with a special video she made for Women’s day.

DD Neelakandan who has a 20 years of experience in TV industry has appeared in few films such as “Power Paandi”, “Whistle”, “Nala Dhamayanthi” etc. She also acted in Gautham Vasudev Menon’s “Dhruva Nakshathram” which is expected to release soon.

The prolific host who has uploaded 640 posts in her Instagram account so far, uploaded her first ever swim suit video on Friday with a caption which impressed many of her followers. She said that gave a lot of thought about people’s opinion before uploading the swim suit reel and disclosed what gave her the courage to upload it finally.

The 36 year old said that she worked 23 long years to reach the place where she is now and revealed about the hours of hard work she went through to get the shape. DD also said that she is uploading the video to make herself happy and do what she likes in her life by adding that she doesn’t know how to swim in a funny way.

Many of her followers including Kumaran Thangarajan of “Pandiyan stores fame, Mahat’s wife Prachi, actor/ producer Nitin Sathyaa lauded the actress’s post and caption. “Am in love with the your Writing in this. To the point🔥 do what makes you happy! Keep going “ said Kumaran in his comment whereas another follower of DD said “Here’s to more of such vacations and happiness that follows DD! Love the way you have captioned this post! Cheers!”

Check out screen shots of their comments below :

A special video DD made on the women’s day occasion impressed many of her followers as well. The video showed the anchor holding different charts that says 36 + Single, 36 + Divorced, 36 + Childless (Yet), 36 + Arthritis, But also 36 + Happy, because everybody’s timeline is different. So Enjoy your timeline, Choose you, Choose happiness and Happy Women’s day. She also added that she forgot to mention 36 + sexy in her social media post.

Sharing the video in her official Instagram account, the seasoned TV anchor DD Neelakandan wrote “Everybody’s life is different, Enjoy your timeline Don’t let society’s timeline determine u a failure … HAPPY WOMEN’s DAY Own ur struggles in STYLE” as her caption.

“This One Is For You Vijay” Genelia’s Sweet Surprise Won The Hearts Of Vijay Fans !!

After the one year celebration of "Vaathi coming" song, actress Genelia who paired with actor Vijay in a romantic film named "Sachein" came up...

After complaining about a restaurant named Moonlight to Swiggy online food delivery platform, the actress came up with a series of stories condemning the...