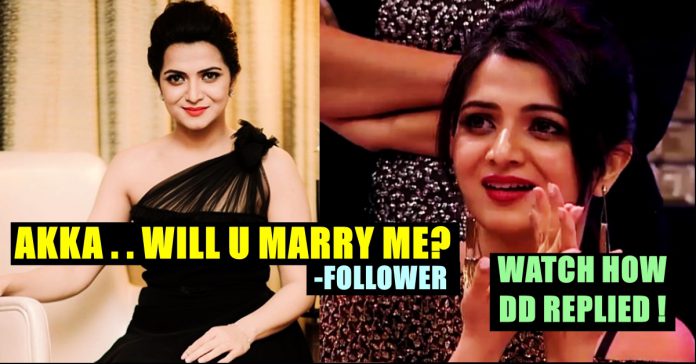 Celebrities and TV stars getting marriage proposals from fans is common but have you ever witnessed a guy proposing his favourite female celebrity by calling her as “Akka” ?? An user of Instagram app proposed popular TV host DD Neelakandan to marry him and the “Whistle” actress found it so weird as the guy called her as “Akka” (sister) while proposing her. Celebrities and TV stars conducting chat session through their official social media accounts to interact with their fans and followers is common nowadays. They find it easy to keep their followers engaged in this way as the whole country is quarantined right now. They can also avoid the absurd questions asked by few followers who intend to troll or criticize while conducting Instagram Q & A.

DD Neelakandan who has a 20 years of experience in TV industry has appeared in few films such as “Power Paandi”, “Whistle”, “Nala Dhamayanthi” etc. She also acted in Gautham Vasudev Menon’s “Dhruva Nakshathram” which is expected to release soon after the lockdown. DD who enjoys more than 15 lakh followers in Instagram conducted a chat session with her followers on Thursday and answered to many of their questions.

So many of them expressed their admiration towards the anchor who is known for her humorous counters and for her cool attitude in the shows she is hosting. Some of her shows such as “Koffee with DD”, “Jodi no.1” garnered huge viewership and she maintains a strong friendship with some of the top celebrities of Tamil film industry such as Nayanthara, Trisha etc.

Now, in this chat session, DD was asked by her followers to answer about her experience in media industry and about her perception towards love etc. She answered to them in a cool manner by posting videos and pictures. However, few of followers embarrassed her through their questions which is evident in her facial expression while answering to them. One of her follower wrote “Akka ongala romba pudikum..so will you marry me akka?” (Sister, I like you so much, so will you marry me sister)he asked in his question.

This is not the only question asked to DD about her marriage. One more user asked her to marry him and DD exposed his name and said “I am sure you are going to find someone who is going to love you so so much. Thanks for asking” she said.

To another user who asked whether DD got married or not, she replied to him by saying that she is not married.

DD Neelakandan married to her long time friend & assistant director Srikanth Ravichandran and the couple got separated in the year 2017. Currently she is appearing in shows such as “Enkitta Modhaathe”, “Dancing Superstars” and “Speed Set Go” in Vijay TV.

Comment your views on these replies of DD to those who proposed her !!