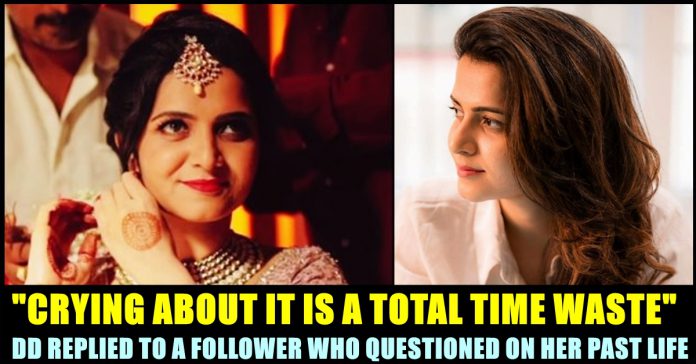 Anchor Divya Dharshini who is popularly known as DD among the television audience, conducted a question and answer session with her Instagram followers and answered to some of the interesting questions which includes about her upcoming ventures, belief in second love, effects of past life etc. The motivational answers she provided has impressed her followers and the Vijay TV anchor has been garnering unconditional love from many of her followers.

When one of a follower asked whether the past life of her affecting her current happiness, the seasoned host said that it is not at all affecting her as it got over. DD said that one shouldn’t look back at such things and must move forward after learning the lesson. She felt that regretting about the past life is mere “Time waste” and suggested her followers not to look back as well.

DD Neelakandan who has a 20 years of experience in TV industry has appeared in few films such as “Power Paandi”, “Whistle”, “Nala Dhamayanthi” etc. She also acted in Gautham Vasudev Menon’s “Dhruva Nakshathram” which is expected to release soon after the lockdown. DD who enjoys more than 21 lakh plus followers in Instagram, is pretty much active in engaging them through her posts. On Saturday, DD conducted a chat session with her followers. and answered to their questions.

“Does your past life affects your current happiness around you ? If so, How will you manage to overcome it ?” a follower asked Divya Dharshini. Answering to him/her, DD said that it is not at all affecting her as she is not looking back at it now. “No, not at all. Once it’s over, over. We should never look back at it. We should learn the lesson alone and look forward” Divya said after recording a video.

“We should always look forward. We should march towards the future. Regretting about the past and feeling bad about it is just time waste” she added. Watch the video below :

Such a sweetheart ♥️♥️ Amazing answer from DD about dealing with the past!! 🥰♥️ Love you so much akkaaa♥️♥️😍 @DhivyaDharshini pic.twitter.com/i3fEjF7qBK

To another follower who asked whether she believes in second love, the 36 year old said “There’s nothing like second love and first love. Those are the terms used only in cinema. Love will come and go in your life. It’s a part of your life. It’s wrong to love four, five people simultaneously” DD said.

Recently, relationship advice to men and women through an event conducted by Vijay Television management has impressed a number of celebrities and many of the users of Internet. She asked people to give up on relationships if it makes them feel toxic and suggested them not to worry about the opinions of people.

“Be it a girl or boy, if you realized that you have picked a wrong object, drop it without a second thought. Don’t hold on to that object thinking that people would throw shades at you. It will cost your life” DD said. “No people would care to talk about your choice of dropping the object after two days. I request everyone to leave the object you picked as soon as realizing that it is a wrong one” the TV anchor said in her speech amidst the applause of the auditorium.

Indian skipper Virat Kohli received wishes from across the globe as he turned 30 on November 5, 2018. While he was hailed by many...