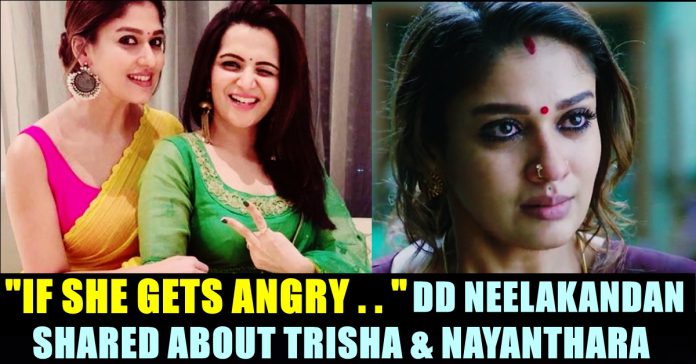 DD Neelakandan who is a TV host by profession has a good bonding with few of the big names of Kollywood industry which is evident through her social media posts. Recently, she appeared in a live interaction with her 15 lakh followers in Instagram and answered to their questions with so much patience and love. To few of the fans who asked her to share about few of the top actresses, DD shared without a second thought, videos of which is doing rounds in social media now.

Celebrities and TV stars conducting chat session through their official social media accounts to interact with their fans and followers is common nowadays. They find it easy to keep their followers engaged in this way as the whole country is quarantined right now. They can also avoid the absurd questions asked by few followers who intend to troll or criticize while conducting Instagram Q & A.

In this interaction session conducted by DD, The Vijay TV star was asked many personal questions such as whether she got married or not etc. However, she stayed calm and answered to many of them. When one of a follower of her asked to share about actress Nayanthara, DD who shares a strong friendship with her revealed how Nayanthara would react if she gets angry.

“One thing I like the most about her(Nayanthara) is, she won’t hide things. If she get angry about something, she would immediately pick her phone up and would mention what all disappointed her. Instead of pretending to be nice while having something else in heart, this is way better” said DD to the fan.

To another fan who asked her to share about Trisha, DD said that Trisha’s mind is what she likes in her. “She won’t worry about things and would lead her life in her own way. Hats off to her for the way she lives her with her own rules” said DD.

DD Neelakandan who has a 20 years of experience in TV industry has appeared in few films such as “Power Paandi”, “Whistle”, “Nala Dhamayanthi” etc. She also acted in Gautham Vasudev Menon’s “Dhruva Nakshathram” which is expected to release soon after the lockdown. Some of her shows in Vijay TV such as “Koffee with DD”, “Jodi no.1” garnered huge viewership. (Also Read : DD Replied To This Weirdest Marriage Proposal !!)

Check out some of the other answers of the Anchor regarding and marriage and for the proposals she received :

Comment your views on her answers to her follwoers !!