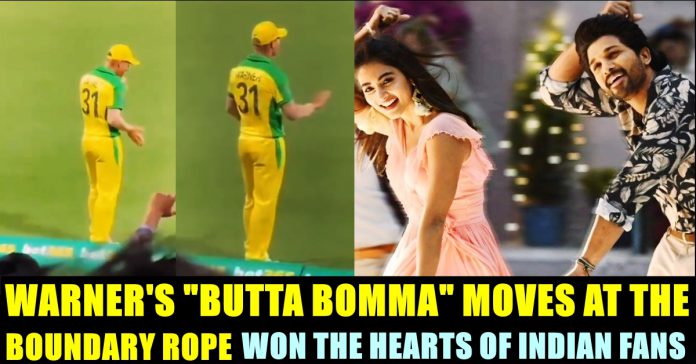 The never ending love story of Australia’s David Warner and Telugu hit song “Butta Bomma” continued in Sydney cricket ground as well. The opener who won hearts of Indian fans through his moves in Tik Tok, impressed them by performing while fielding for his team in today’s match. The crowd which witnessed the 34 years old shaking his legs slightly went gaga which we could see in the viral video.

As Warner is playing for Hyderabad team in IPL, he gained a large number of followers from the region in social media platforms. He is very much famous for his Tik Tok videos in India and most of his followers in the micro video posting mobile application are from India as well. Realizing the fact, Warner started making Tik Tok videos based on Indian movies, especially based on Telugu movies to impress the fans of his Sunrisers Hyderabad team.

He has been doing Tik Tok videos with his family since the lockdown was implemented. What started as a mere entertainment video, turned out viral as stars from India such as Allu Arjun encouraged the cricketer to do more. One Tik Tok of himself stood tall among the others and is being loved by the fans.

Now, to make fans happy, providing the glimpse of his viral Tik Tok, Warner shook his legs for the “Butta Bomma” while fielding in the boundary for his team. The video is going insanely viral in the micro blogging social media site with the caption “Buttabomma and Warner Never Ending Love Story”

This video had blown up the Telugu twitter medium. Most recently, Warner himself posted the morphed video of himself featuring in the Allu Arjun’s “Butta Bomma” song. “😂😂how good is this. Definitely my favourite thing during lockdown. I was so happy to hear this song played throughout the IPL. #music #buttabomma” caption of his post read.

Watch the first ever “Butta Bomma” performed by Warner and family during the lockdown.

Warner also won the hearts of fans through his gesture of tying the shoe lace of Hardik Pandya while he was batting. The SRH captain scored a brilliant half century and helped his team to get a smooth opening.

David Warner is enjoying a separate fan base in India for his cricketing skills. Days ago, Warner posted stories expressing his concern over the people of Chennai city ahead of the “Nivar” cyclone. “Hope everyone in Chennai is safe, Very scary this in Chennai today” the cricketer wrote in his Instagram