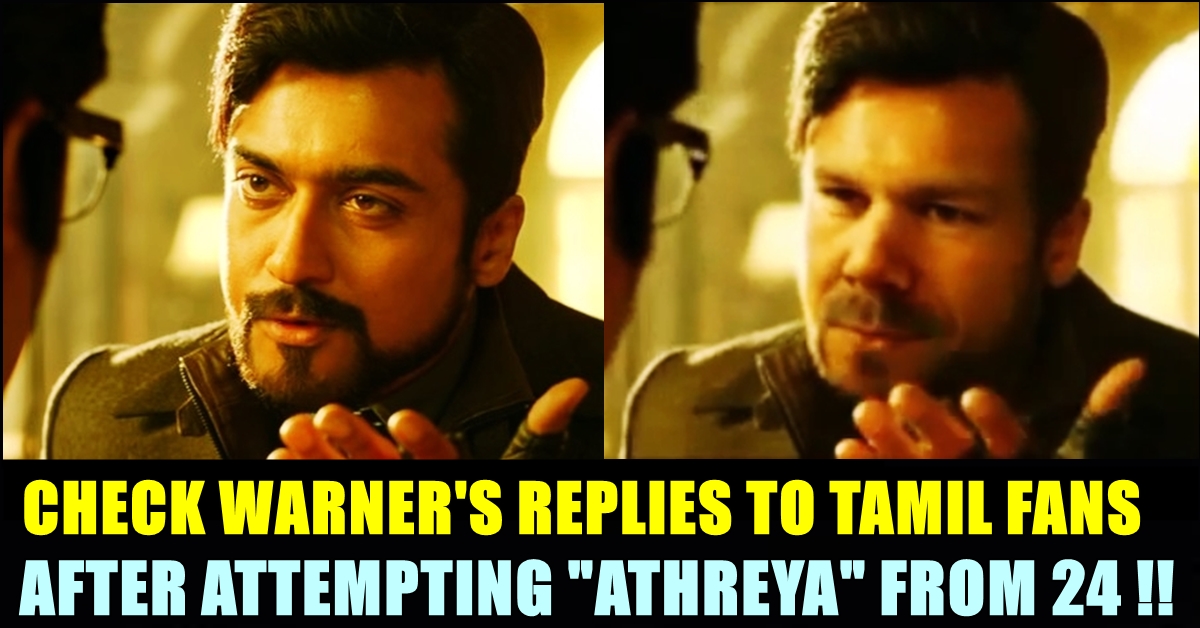 David Warner has been winning the hearts of Indian fans since the lockdown was implemented. After doing Tik Tok videos based on Telugu songs and dialogues, Warner has started impressing Tamil fans by posting videos imitating the Tamil stars. Most recently, he morphed his face with Tamil actor Suriya and grabbed the attention of Tamil cinema audience. He replied many of the Suriya fans who responded for his attempt as well.

David Warner is an Australian left handed cricketer who is representing his team in all the three formats. His terrific batting skills and athletic fielding abilities had gained him the world wide recognition. In Indian Premier league, Warner has been leading Sunrisers Hyderabad team. He is one of the main reasons for Natarajan’s existence in the national team now.

Currently, he was ruled out off the T20 series against India and is expected to make a come back in the test series due to the groin injury he is going through. In a statement, Cricket Australia said that Warner, who had suffered a groin injury during the 2nd ODI against India in Sydney on Sunday, had missed today’s One day international and will also miss the T20 International series. He is expected to to regain fitness for the upcoming four match Test series against India.

The injury occured when Warner tried to save a ball struck by Shikhar Dhawan towards the mid off in the 4th over of India’s innings. When Warner dived to stop the ball, he got injured. Warner grimaced and clutched his groin as he got to his feet while the team’s physio sprinted onto the field. The SRH captain walked off the field.

While recovering, Warner has been entertaining his Instagram followers who are mostly Indians. He who became famous in India by recreating the popular “Butta Bomma” song of Allu Arjun, had morphed his face with actor Suriya in one of his recent posts.

In the movie “24”, there would be a scene where the evil Suriya would threaten the innocent Suriya to get a watch which has the power to time travel. Morphing his picture with the antagonist Suriya, Warner wrote “No person is getting this one 😂😂 #actor #movie also who is winning the game?? #australia” as his caption.

As soon as Warner uploaded the post, the comment section were flooded with the comments of actor Suriya fans from Tamil nadu. To a fan who predicted the answer right, Warner wrote “gee whiz” as reply which means significance of something especially by the use of clever or sensational language or marked by spectacular or astonishing qualities or achievement.

Here’s some of the other videos uploaded by David Warner :

Not Arya But This Top-Tier Actor Was Supposed To Play Lead In “Sarpatta Parambarai” !!
Anchor Maheshwari’s Fitting Reply To An Insensitive Comment Of A Man !!