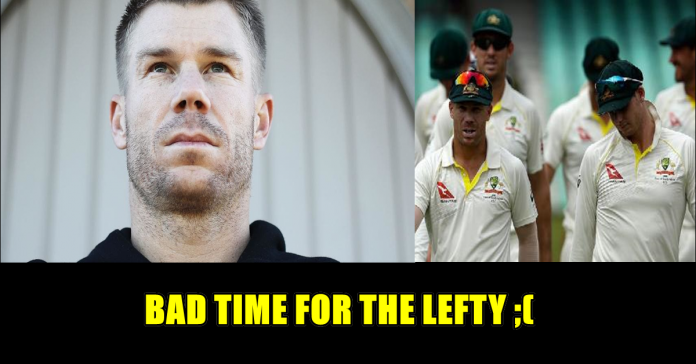 David Warner Left The Team Whats App Group And Behaved Rude At The Team Hotel : Reason Behind Is Shocking !!

The 31-year-old batsman stood down as vice-captain for the remainder of the third Test against South Africa after Steve Smith admitted that Australia’s ‘leadership group’ were behind a ball-tampering scandal involving Cameron Bancroft. Having led Australia to No 2 in the International Cricket Council [ICC] T20 rankings in the recent series against New Zealand, there’s every possibility that Warner could be one of the tallest trees to be felled in what will be a headline heavy build-up to the fourth test against South Africa.

The First Test in Durban was plagued with an ugly row between Warner and Quinton de Kock – with CCTV footage appearing to show the Aussie lose his temper. Cricket Australia are set to investigate the incident and it’s understood the positions of Warner, Smith and coach Darren Lehmann are under serious threat.

James Sutherland, CEO of Cricket Australia, is due to arrive in Cape Town on Tuesday night to dish out penalties for Warner and Smith.

Some Australian players want a “rogue” David Warner out of the team hotel in South Africa as the ball tampering saga threatened to rip the touring side apart, amid reports that suggested the opening batsman was the ring leader of the scandal. Warner’s furious teammates have asked Cricket Australia bosses to have the batsman removed from the team hotel, warning there could be an “incident” between Warner and angry players if he remains.

Warner has also removed himself from a WhatsApp group comprising Australian players, with one source saying he has “gone rogue” since the ball tampering saga broke. It’s believed several players in the Australian team were not aware of the tampering plot until damning footage of Cameron Bancroft scrubbing the ball with yellow tape appeared on the big screen at the ground.

Previous articleFacebook Knows Every Detail About You From Your Phone : Including This. ?? : WHAT THE FFFFF . . .
Next articlePeculiar Food Items In India That Will Make You Crave !!!