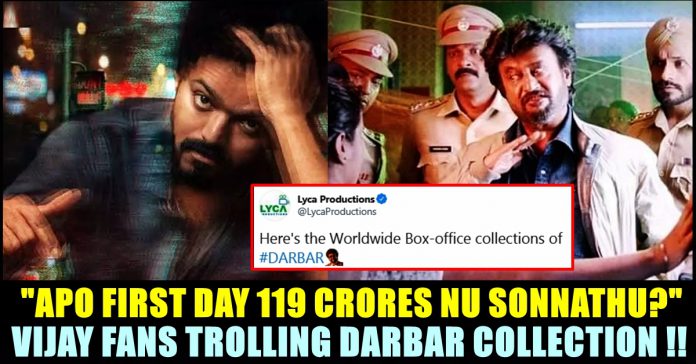 Lyca Production has announced about the official collection report of their recent release “Darbar”. Darbar released in theatres recently and fans of Superstar are very much excited after witnessing the film. The film which revolves around the protagonist Adhithya Arunachalam ( Rajinikanth), has every element of a Superstar movie. Nayanthara, Nivetha Thomas, Yogi Babu, Suniel Shetty, Prateik Babbar were done the supporting roles in the film. It is notable that Rajinikanth is returning on screen as a cop after 25 years.

Rajinikanth played the role of a cop in 1992 released Pandian. The background score and soundtrack were composed by Anirudh Ravichander, while cinematography and editing were handled by Santhosh Sivan and Sreekar Prasad, respectively. As soon as the film released, reviews pouring from all directions of Internet. Now as per fans request, producers of Darbar has came up with an official announcement about Darbar’s collection report.

Lyca Productions, through their official twitter account has said that film has collected 150 crores worldwide on the first 4 days since the release of the film. “Here’s the Worldwide Box-office collections of #DARBAR ‘Anyone can play the game, but the throne always belongs to the EMPEROR 👑”

Many fans of other actors who saw this post from Lyca Productions questioned about the fake box office report that got spread on the end of first day. The fake report said that the Superstar starrer has collected 119 crores on the first day of its release. “How could a film restricted to collect 150 crores in 4 days when it managed to collect 119 crores on the first day itself?” asked one of a twitter user.

Young and emerging actress Yashika replied to a dirty question of one of her followers in a savage manner. To the one who asked...