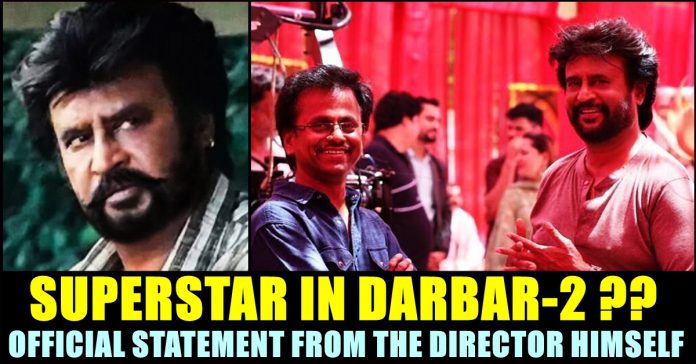 Superstar who was last seen in Karthick Subbaraj’s “Petta”, is next to be seen in A.R Murugadoss’s directorial. The film which is planned to release on Pongal, has Lady Superstar Nayanthara in the female lead. The makers of the movie released its trailer recently and it is going viral across the internet.

The film, which is titled Darbar, appears to be a cop drama of sorts. In the first look poster, Rajinikanth’s elated picture takes the centrestage as insignia from a cop’s uniform including a belt and a shoulder badge surround him. The film is about to show Rajinikanth as a Mumbai based cop who stands against a vicious villain Suniel Shetty.

A.R Murugadoss has a habit of appearing in his films in cameo roles. When the host of the interview asked him whether he appeared in “Darbar” in cameo role, Murugadoss said that he hasn’t got that opportunity to share screen space with the Superstar. “It didn’t happen. Just because I like to appear with Superstar, I can’t do it. I couldn’t act in the movie as the movie was shot in a Mumbai backdrop. Almost every artist who acted in the movie are North Indians. I can’t appear in the film just like that.” said A.R Murugadoss who added that there are possibilities for a sequel of “Darbar”.

“We can make a sequel for any film nowadays. For movies like Avengers, they are bringing back the dead characters in the name of reassemble. As far as Darbar is concerned we have kept the lead for a second part” the director said in the interview.

Watch the video below from 30th minute :

Further the director said how carefully he looked after Rajinikanth in the sets of “Darbar”. “I can show him as a 40 year old man but in reality he is way more older. So I took care of his health very consciously. In the film’s fight sequences, fighters did well and Superstar did his part extremely good” Murugadoss said in the interview.

The film also features Prateik Babbar in a negative role and Rajinikanth is returning on screen as a cop after 25 years. He played the role of a cop in 1992 released Pandian. Darbar, slated for Pongal 2020 release, will the first of the most-anticipated films of the year. The background score and soundtrack will be composed by Anirudh Ravichander, while cinematography and editing will be handled by Santhosh Sivan and Sreekar Prasad, respectively.

What do you think on Superstar playing the lead role in Darbar 2 ?? Comment your views below !!

Previous articleSJ Surya Replied To A Fan Who Misunderstood His Tweet !!
Next articleKushboo Uploaded Her Old Picture !! Top Heroines Stunned !!

To prevent the consumption of illegal drugs such as "Ganja", police officers of Hyderabad decided to scroll through the personal chats of public by...