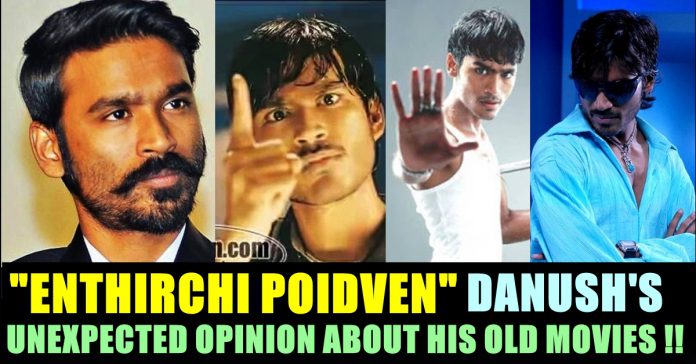 Asuran is an upcoming Indian Tamil-language action drama film written and directed by Vetrimaaran. The film stars Dhanush in the dual roles of father and son. The film marks the debut of Manju Warrier in Tamil cinema. It was produced by Kalaipuli S. Thanu under his production banner V Creations. G. V. Prakash Kumar scored the music for the film, rejoining back his association with director Vetrimaaran. The film is based on the novel Vekkai by Poomani.

The audio launch of the movie took place recently and the movie crew which includes Vettri Maaran and Danush gave their speech for the first time regarding the movie since the announcement. In the audio launch Dhanush kept it simple in a white shirt and matching dhoti paired with brown loafers, the lead lady Manju looked ethereal in a grey and red suit with matching juttis.

Danush who expressed his disappointment on the National award juries for not considering Tamil movies such as Merku Thodarchi Malai, Ratchasan, Pariyerum Perumal also said that he expected an award for Jackson who worked as an art director in Vada chennai movie.

“Me and Vettri Maaran bought it on 2010 and we are not expecting it another time. We never celebrated much when we got it and never longed for it.” said Danush in the interview. He also lauded the young actors such as Ken, son of actor Karunas and Abhirami for their effortless performances in the movie.

Danush while talking about their acting skill said that they are scary. “On seeing their fearless acting skill, I came to realize that it is only me who exposed very amateur acting during my initial stage of acting career. Only after reaching my 28, I could able to act with little bit of matureness. Because I fear to see my old movies that I either switch it off or walk away when it plays.” said Danush in the press meet.

The actor is also gearing up for his upcoming projects, for which his fans are eagerly waiting. Dhanush will be seen in the romantic thriller Enai Noki Paayum Thota, which is slated to release on 6th September, and is very much expected to join hands with Vetri Maaran once again for the sequel of Vada Chennai.

Dhanush’s first film was Thulluvadho Ilamai, a 2002 coming-of-age film directed by his father, Kasthuri Raja. Over the last 15 years, Dhanush has starred in over 25 films. Dhanush won the Best Actor award at the 58th National Film Awards for his performance in Aadukalam (2010). In 2011, Dhanush’s popular song “Why this Kolaveri Di” became the first Indian music video to cross 100 million views on YouTube. Dhanush produces films through his production company, Wunderbar Films. In addition to his best actor award, he has a national award for a movie he produced, Visaranai. He has also won seven Filmfare Awards.

Kamal Haasan Got Angry & Shushed A Fan Who Shouted “Vikram”!! Check Why

On Monday, Kamal Haasan launched "Blood commune", a blood donation campaign which has been an important feature of the welfare club activities for several...

“Use Only Hindi Or English” Southern Railways Sent Circular To It’s Staffs !! Check Why !!

Southern railways sent circular to station staff and train operation controllers to communicate only in English or Hindi while communicating officially. Recently the topic...