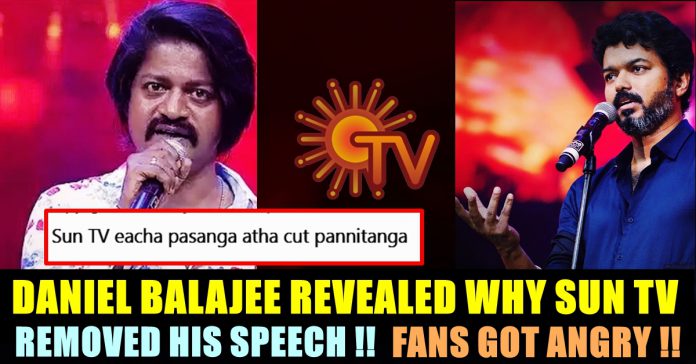 Daniel Balaji, one of the most talented actors in Kollywood industry is known for his performances in films like Vettaiyadu Vilayadu, Polladhavan, Kaaka Kaaka etc. The actor who was last seen Vettri Maaran’s Vada Chennai is about to make his appearance in Vijay’s most anticipated film BIGIL.

The high budget movie’s audio launch took place in Sai ram Engineering college last week and the crew members of the movie were given a chance to deliver their Thanks speech. The event was telecasted a day later in Sun Television.

Daniel Balaji who saw the telecast, on Monday, reported that the channel has edited a part of his speech about Thalapathy Vijay. Fans of Vijay requested the actor to share it in his social media account. Check out the tweet of him regarding the matter here :

Now the actor, in his another tweet has revealed what he actually said about Vijay. The tweet he shared shows that the actor has actually praised Vijay for being a protector to his co-artists. “He is a good friend for me, a good son for his followers and for the fans who are living in his heart, he is a good leader. He will come soon” the post read further.

As soon as seeing this tweet, Fans of actor poured their love on Daniel Balaji and also thrashed Sun Television for not telecasting it. Check out some of their reactions here :

@Suntv or @JayaTvOfficial They will use Thalapathy only for their TRP business..

Both DMK and Admk are worst only..

Sun Tv is doing politics in this.

Vijay’s speech in the audio launch of Bigil is talk of the town since it took place. Right from addressing each and every person in the film by their names to requesting fans to use social media responsibly, Vijay struck the right chords with the audience. The actor even spoke about Subashree, a young woman who recently died in Tamil Nadu after an illegally placed hoarding fell on her scooter and killed her. He offered his condolences to the family and asked fans to put hashtags and trends to a better use. The audio launch was officially streamed on Sun Tv during Sunday evening.

What do you think on Sun TV editing a particular part of Daniel Balajee’s tweet ?? Comment your views below !1

Previous articleDirector Parthiban Wants To Hurt Himself With Slippers !! SHOCKING REASON !!
Next articlePopular Producer Lodged Complaint Against Kamal Haasan For This Shocking Reason !!