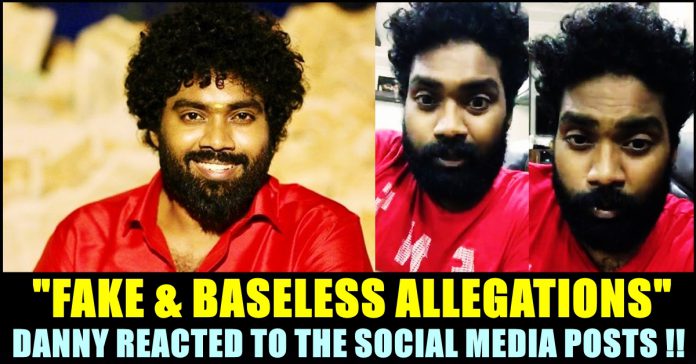 Reacting to the allegations that surfaced against him through several tweets, memes, videos in social media platforms for the past four days, Daniel Annie Pope, popular actor and former Bigg Boss participant came up with an Instagram post. The note which was issued by the lawyer of the actor, denied all the allegations against him by terming them as fake, baseless and vague.

The note also wanted all the social media users who uploaded posts against him to withdraw their allegations and warned them that Danny will be initiating a criminal complaint in cyber cell if they failed to do so. “My client states that for the past four days there is a rumour spreading over in social media like Facebook, Instagram, YouTube, Twitter etc., about my client which is fake, baseless and vague allegations against him.” the note which was uploaded on Danny’s Instagram account read.

“My client further states that you are all working to damage his reputation in the society by using defamatory words. Therefore I hereby call upon you all to withdraw all the allegations, memes, videos which were uploaded against my client immediately from the social medias otherwise my client will be initiating criminal complaint in cyber cell, Chennai and file a defamation case against you and liable to face a consequences thereof.” it further stated.

It all started when a screen shot of an alleged chat between the official Instagram account of Danny and a 17 year old girl surfaced in the social media platforms. Since the morning of Friday, a number of Instagram meme pages and twitter users had been sharing a series of screen shots that shows the official Insta handle of the actor texting to a random school studying girl and asking her to send her picture.

#DanielAnniePope hitting random girls DM at late night & asking their pics. a 17 years old school girl (she didn't give him any of her details) & he is a married guy with a kid. he asked her to send her pics & its 2AM don't know how long he's been doing like this.#RETWEET #IPL pic.twitter.com/bn9U8irtEF

The real face of Daniel Annie Pope and someone gave him a slipper shot when he messaged her in facebook.

The victim was 17 when he texted. Another underage girl. pic.twitter.com/6cbeURULCI

Daniel Annie Pope being a pedo:
credits to bitchparotta on ig pic.twitter.com/EuS0dlQlQF

Pedo Alert.. This guy @Danielanniepope
Seems to doing movie promotion and after that seems to be repeated offender. He has disabled his messaging In Instagram and have switched off his comment section.Something is suspicious.@IndiaMeToo @Chinmayi @dhanyarajendran pic.twitter.com/iGbYasD8s5

Tamil nadu BJP member Gayathri, on seeing the election results in the 5 states in North, came up with a tweet saying that Tamil...