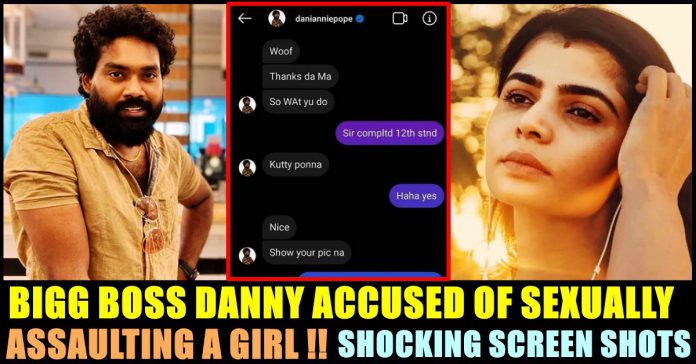 On Friday, many screen shots of Instagram chats between Daniel Annie Pope and many unidentified girls kept surfacing in Instagram. While people were tagging Danny and his wife to question regarding the same, Jason Samuels who made headlines by exposing female celebrities who failed to do promotions for brands after getting paid from them, uploaded a video in his Instagram account and played a testimony of a woman against Danny.

Reacting to the video, Chinmayi wrote “What started as a story by a 17 year old, blew up on Instagram today. (@)thejasonsamuel went live on Instagram a while ago detailing how he spoke to a lot of survivors; they have given audio testimonies as well of serious sexual assault by an actor.”

In the live, Jason Samuels showed a series chats Danny had with random girls from the year 2014 and played an audio of a girl’s testimony. He also said that Danny couldn’t say that the messages were sent by his admin or manager and showed a video of the actor from one of the chats.

Samuels said that he talked to a victim who got sexually assaulted by the actor. “She came to Chennai with her friend for some other purpose after becoming his friend through social media. When the girl’s friend left to meet her cousin, Danny reached her room by repeatedly calling her through phone” said Samuels.

Watch his live below :

It all started when a screen shot of a chat between Danny and a 17 year old girl surfaced in the meme pages of Instagram. Since the morning of Friday, a number of Instagram meme pages such as “Vadivelu memes”, Thonuchu “Sollitom” has been sharing a series of screen shots that shows the official Insta handle of the actor texting to a random school studying girl and asking her to send her picture. Read : Bigg Boss Danny Texted To Random Insta Girl & Asked Her To Send Pictures ??

Danny who is currently enjoying 1 lakh plus followers in Instagram, married his long time girlfriend Denisha as soon as getting out of the Bigg Boss house. The couple gave birth to a baby boy in the year 2020. Currently, he is pretty much active in participating in the promotional events of his recent film “Vanakkam Da Mapla” directed by M. Rajesh.

Ravichandran Ashwin is known for providing savage replies to his followers in social media platforms, recently took time to reply to a user who...