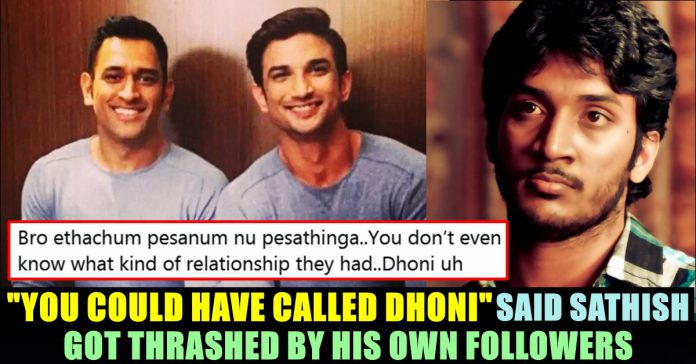 Many people are expressing their opinions on the demise of young talent Sushant Singh Rajput. The actor who allegedly killed himself due to depression, left the entire country in utter shock. While many stating that could have faced the problems with courage instead of giving up, few people are stating that he is the only one who knows what he went through before taking this decision. Number of celebrities even requested people in social media to spread love instead of hatred as they don’t know what the other person in going through in his/her life.

Remember this – even a single hate or body shaming tweet from you to a person might be causing depression to another person somewhere in the world.

Few even said that they understood money and fame couldn’t give inner peace. Meanwhile actor and dance choreographer Sathish who is known for appearing in “Achcham Enbathu Madamayada” film, posted a tweet stating that Sushant could have called Dhoni before taking this decision of killing himself.

It is very well known that Sushant portrayed the role of veteran cricketer MS Dhoni in his biographical picture. During the making of the film, Sushant spent most of his time with MS Dhoni to learn his mannerisms and behaviour to imitate him in the film. They both appeared together in the promotional events of the film as well. Sathish, in his tweet, asked Sushant how could he end his life while being a known person to MS Dhoni.

“Buddy u could have called MSD before taking this decision . Knowing him in life how can you end your life . Can’t believe n very disturbing. Suicide is not the solution. God give strength to his family.” read the tweet of Sathish in which he uploaded a picture of Sushant sitting along with Dhoni.

Buddy u could have called MSD before taking this decision . Knowing him in life how can you end your life . Can’t believe n very distrubing. Suicide is not the solution. God give strength to his family. pic.twitter.com/glZKyBa0g5

This tweet from the dancer mostly received negative reactions as people wanted him to stop praising his favourite cricketer during a demise of a young talent like Sushant. “Laxman said he couldn’t reach Dhoni at the time of his retirement.. no hard feelings to Dhoni.. but kindly don’t bring Dhoni here.. A life is gone and u r glorifying Dhoni..” wrote one of a twitter user whereas many others said that it is an unwanted statement at this situation.

Laxman said he couldn't reach Dhoni at the time of his retirement.. no hard feelings to Dhoni.. but kindly dont bring Dhoni here.. A life is gone and u r glorifying Dhoni..

So insensitive.not everything is bout Dhoni or any other celebrity.this is about Sushant.this is about depression.if u don’t understand dont say anything this is appaling 🙄

However, the dancer justified his tweet by saying that Sushant had a good bonding with Dhoni and said that mentor’s words plays an important role in a sports person’s life more than anything else. Here’s his tweet :

The picture says it all. He shared a good vibe with him one phone call would have changed is my thought . In sports more than playing mentors words makes a difference. Point is when u feel depressed share it with someone don decide suicide is the solution .go play somewhere