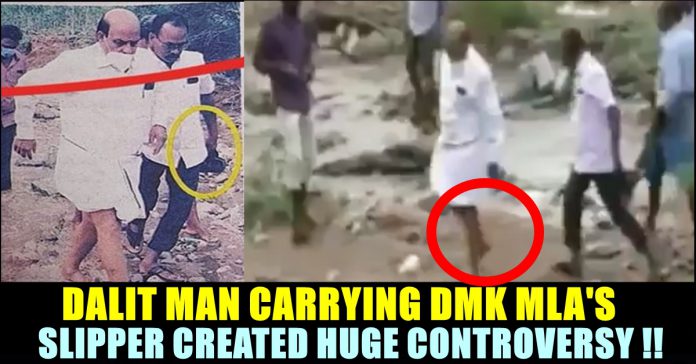 Video of a man who belongs to scheduled caste community carrying the slippers of a DMK MLA from Ambur A.C Vilwanathan has created huge outrage in the social media platforms. The DMK MLA had gone to visit the rain-damaged barrier at Ponnapally village of Arangaldurgam Panchayat in Thirupathur district on June 30. He was accompanied by few DMK members including Venkatasamudram Panchayat secretary Shankar. To walk freely in the slippery surface, Viswanathan removed his slipper and reportedly directed Shankar to carry his slippers.

Recently, the Ambur DMK MLA Mr. Viswanathan has directed his subordinate to carry his slippers through a tough trail.
Would Journos @NairShilpa1308 & @Ahmedshabbir20 question this like how they questioned Rajni when one of his servants were standing behind him in a viral still? pic.twitter.com/TUWKvAjkHG

However, Shankar has refuted the criticism and said that he voluntarily carried his slippers. While talking about the matter, MLA VIlwanathan has said that he does not discriminate people by their caste and added that the allegations levelled up against him are just hurting him. “This is a controversy created by those who couldn’t tolerate my growth” he said to the media, according to reports.

Earlier, Video of Minister Dindigul C Sreenivasan who serves as Minister of forests, demanding a little boy to remove his sandal got surfaced in Internet and created huge controversy. The Minister who visited Mudumalai Tiger reserve to inaugurate Elephants welfare camp, is facing the wrath of social media due to his activity. The video which shows the minister asking a boy to remove his sandal while he is on his way, has created furore in social media platforms.

When this minister can't even bend his body to remove the footwear on his own, he should avoid wearing those with buckles. While leaving home, the menial staff would have helped him wear them & so in a public place he thinks nothing wrong in asking a child to remove it for him.🤦‍♂️ pic.twitter.com/oMYenGkZ5h

While being questioned on the incident, N Sreenivasan said “When I was on my way to visit the temple, those boys were playing nearby. Assuming him as my grandchild, I asked him to take off the buckle of my sandal. He is just a small boy. I didn’t ask any elder people to do that.”

I do remember one channel that did a debate on such an issue when it involved Minister Dindigul Seenivasan. Now no outrage? In TN outrage is most often selective and only when it suits political narrative. https://t.co/QpWfwelqGY

Irrespective of the political parties, This kind of ill treatment towards oppressed people is still taking place in the Tamil speaking state. Comment your views regarding this incident !!