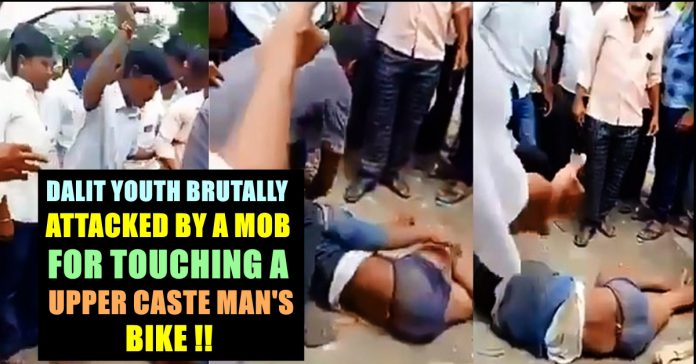 In Karnataka’s Vijayapura, a 28 year old Dalit man brutally attacked by a mob for touching a vehicle which belonged to a upper caste man. He was thrashed by a group of men and the video surfaced in the internet. His parents and sister who tried to save him were also beaten up by the mob. The incident took place on Sunday and the incident came to light only after the video went viral, triggering netizens due to the brutality.

The victim, named as Kasinath and his family members are undergoing treatment at Muddebihal government hospital. The victim has suffered several internal injuries and his family members were treated for minor injuries, according to sources. The victim’s father Yankappa Husanappa Talwar has filed a complaint stating his son Kasinath was assaulted by a group of 13 people when they were going to their agriculture.

Here is the FIR and complaint copy pic.twitter.com/WaPHALMhXw

“My son pleaded for mercy, but they assaulted him. When I tried to intervene along with my wife and daughter, they thrashed us and threatened to set our house and our entire Dalit colony on fire. I’m scared to go back to my village now” the father said in his complaint.

“We have registered case and arrested three of the 13 accused under SC/ST Act” said Vijayapura district superintendent of police Anupam Agarwal to the press. When a police team visited the village on Sunday, some upper caste villagers accused Kasinath of misbehaving with two girls on Saturday. According to few of them, the man removed his clothes and had made obscene gestures towards girls who were washing clothes. The SP said that they were probing the allegation though there is no complaint yet. On Monday. the SP deployed an additional personnel as a precautionary measure.

Mahantesh Kattimani, taluk president of Dalit Sangharsh samiti said “Even if Kashinath had made a mistake, they should have filed a police complaint. The video shows that the caste factor was behind the attack. We will protest till Kasinath and his family gets justice”.

Rajini Fans Expressed Their Anger To Sirman !! Check His Reply !!

Darbar starring Rajinikanth released yesterday and is being celebrated by the fans who watched the movie. Darbar released in theatres yesterday and fans are...