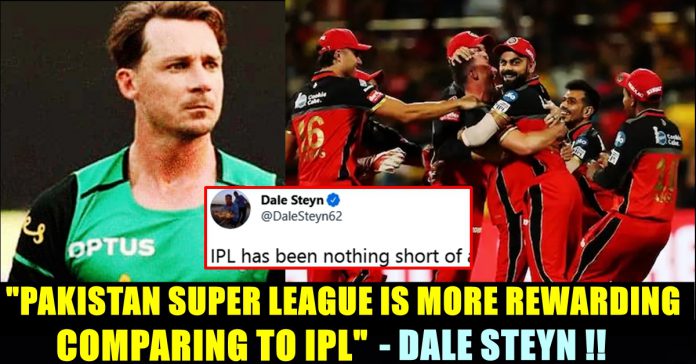 Dale Steyn Sought Apologies After Getting Roasted By Fans !!

A statement made by South African pacer Dale Steyn about IPL tournament landed him big trouble as the cricketer was forced to post a series of tweets giving clarifications. The cricketer, in an online interaction with a sports journalist said that playing for cricket leagues such as Pakistan Super league and Lanka Premier League is more rewarding than playing for Indian Premier League. The cricketer got mercilessly trolled for his statement by the fans of Indian cricket team and came up with series of tweets with an explanation.

It is notable that Dale Steyn opted himself out from IPL 2021 and said that he will playing for other league tournaments. In his 10 year long IPL career, the player has played for several IPL teams including Royal Challengers Bangalore, Deccan Chargers, Sun risers and Gujarat Lions. In the 95 matches he played for IPL, the pacer has picked 97 wickets.

The cricketer is currently representing Quetta Gladiators in Pakistan super league. In a recent interview, the cricketer has made a statement saying that playing for PSL and other cricket leagues makes him feel more rewarding comparing to playing for IPL. The cricketer reasoned the big squads, big names and huge amount of money that is involved in the tournament for his statement. He said that everything emphasis is on the money involved in the league rather than on the game of cricket.

In the interview, Steyn said that when a player plays for PSL or LPL, the importance is given to cricket and added that many people, in Pakistan, reached out to him and asked him about the game of cricket in just a span of two days unlike IPL where people are always interested in talking about the money earned by the players.

When you go to IPL,there are such big squads,so many big names and so much emphasis on maybe the amount of money players earn and everything like that,so sometimes,cricket gets forgotten.When you come to like a PSL or LPL there is an importance on the cricket.Dale Steyn pic.twitter.com/xadKxcKnyv

This statement from the cricketer didn’t go well with the fans of IPL as they immediately started slamming him through their comments in social media platforms. Fans also started digging out his old tweets of the cricketer through which he praised the IPL tournament.

He have tweeted similar thing back then in 2011 as well. But Yes not that directly. 😃🤣😅😆 pic.twitter.com/P3UhUiSwuc

Once you get older and lose your mojo, it's hard to find good contract in IPL since they have plenty of quality overseas players to choose from. Whereas in low quality leagues like PSL, you are still the same old legend, with a secured spot in Playing XI.

Steyn is saying all this after earning 45crores from IPL..He didn't say a word during playing IPL coz that would affect his purse 😂😂
To all the Pakistanis who are rejoicing…Steyn has put PSL and LPL at the same pedestal…I thought that u all would be more pissed on that. 😅

The huge money didn't affect Steyn for 12-13 years in IPL but suddenly when he's finished & started getting treated like a rubbish bowler in IPL, he came to know Cricket is bigger than money 🤣

On seeing these kind of reactions, Steyn came up with a tweet writing “IPL has been nothing short of amazing in my career, as well as other players too. My words were never intended to be degrading, insulting, or comparing of any leagues. Social media and words out of context can often do that. My apologies if this has upset anyone.”

IPL has been nothing short of amazing in my career, as well as other players too.

My words were never intended to be degrading, insulting, or comparing of any leagues.
Social media and words out of context can often do that.

My apologies if this has upset anyone.
Much love

Finally Starbucks Reacts To The “Coffee Cup” Blunder In “Game Of Thrones” !! Hilarious !!

If you haven't yet watched the fourth episode, The Last of the Starks of Game of Thrones season 8, here's a spoiler that can...