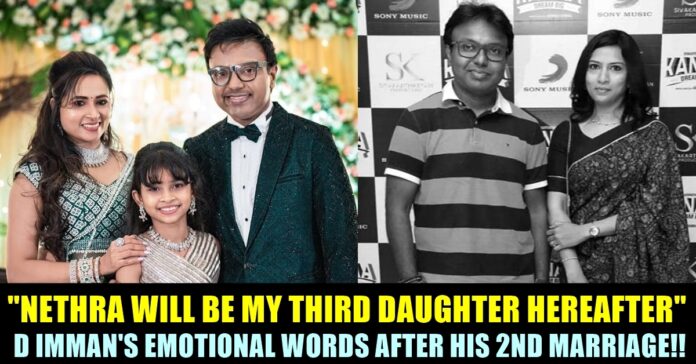 Kollywood’s music composer D. Imman who is known for giving many chartbusters in his long career, penned an emotional note after marrying for the second time. The national award winner said that he is missing his two daughters in the wedding and also made it clear that Nethra, daughter of his newly wed wife Amali Ubbald will be his third daughter. He thanked all the music lovers for supporting him all these years. 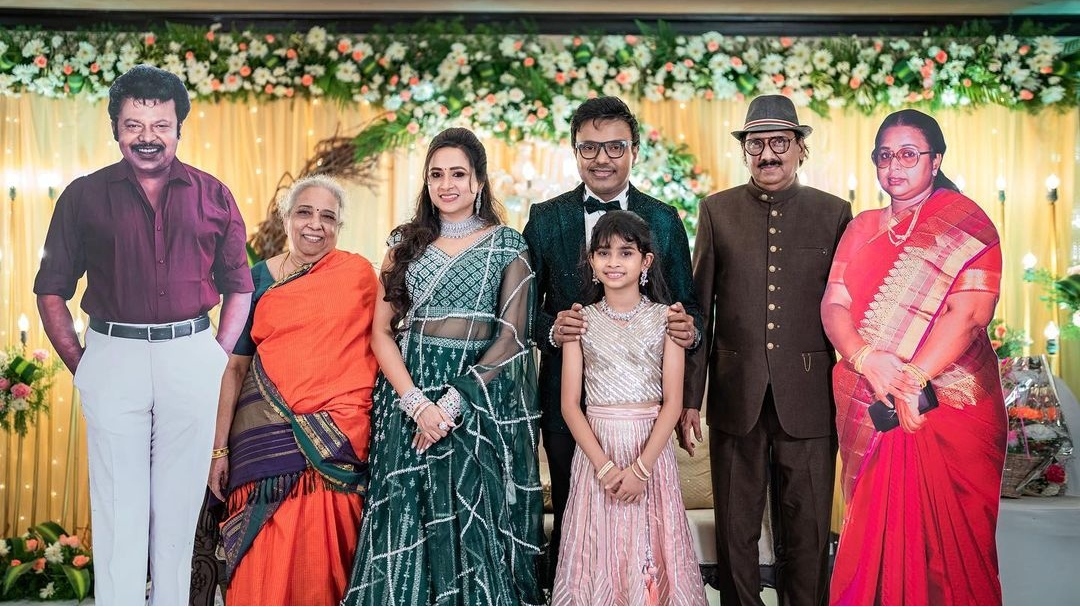 On 29th of December 2021, Imman publicly announced about his divorce with Monicka Richard. The leading music director sought privacy from the public through his post and wanted them to help him and his former wife move forward. Imman said that the divorce took place during November 2020 by mutual consent.

Immanuel Vasanth Dinakaran, better known as D. Imman, is an Indian film composer and singer, predominantly working in the Tamil, Hindi, Telugu, Kannada, Malayalam film industry. His first film as music director was Thamizhan in 2002. Since then he has composed music for 100 films. 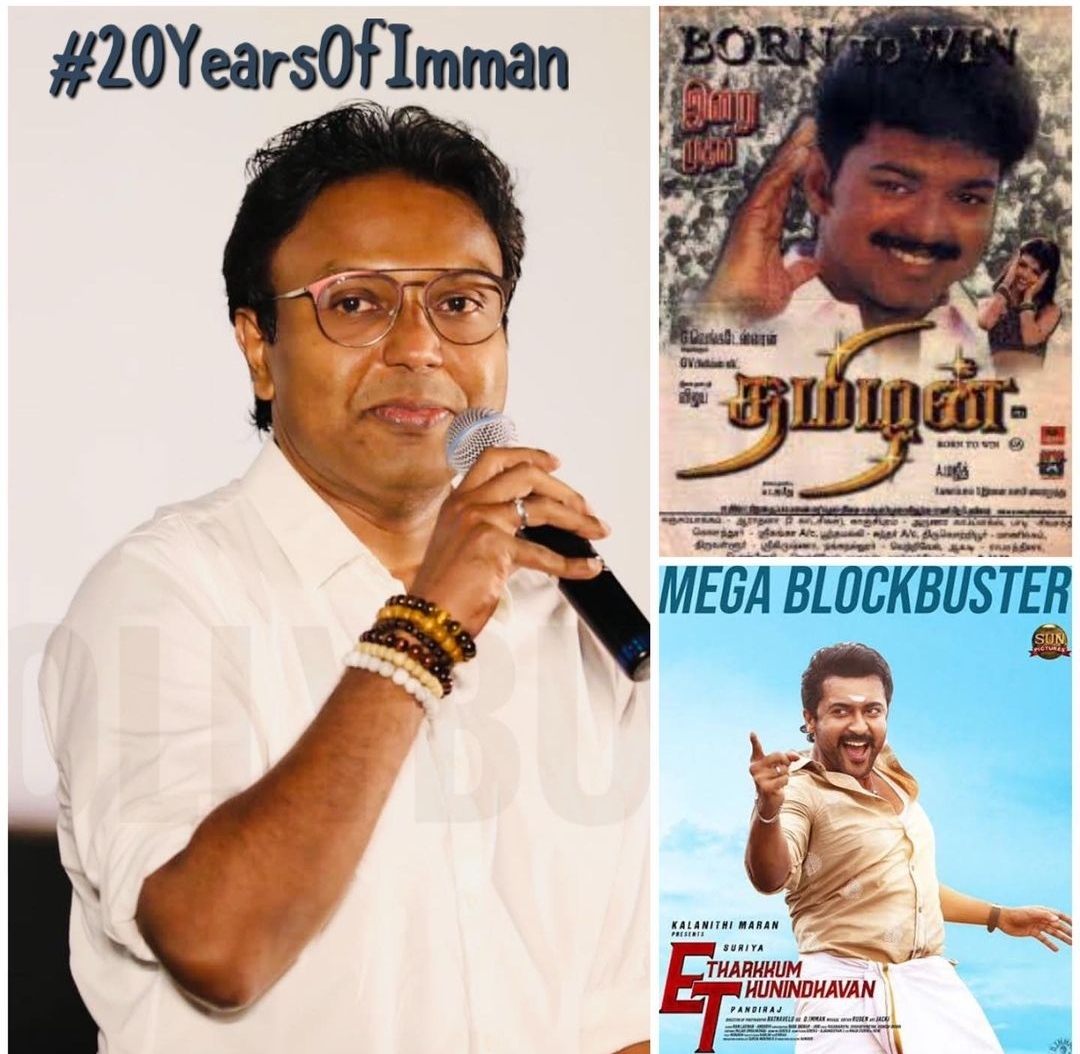 The musician who started his career from scratch never missed to encourage raw talents. He won national award for composing music for Ajith-starring “Viswasam” directed by “Siruthai” Siva. He also composed music for Rajinikanth’s recent film “Annatthe”. Months ago, the music composer has made an official announcement about his personal life.

“TO ALL MY WELL WISHERS AND ARDENT MUSIC LOVERS WHO HAVE BEEN SUPPORTIVE ALL ALONG.I AM TRULY GRATEFUL FOR THAT. AS LIFE TAKES US ON DIFFERENT PATHS MONICKA RICHARD AND I HAVE LEGALLY DIVORCED BY MUTUAL CONSENT AS OF NOVEMBER 2020 AND ARE NO LONGER HUSBAND AND WIFE” Imman said through his post.

“I REQUEST ALL OUR WELL WISHERS, MUSIC LOVERS AND THE MEDIA TO GIVE US OUR PRIVACY AND HELP US TO MOVE ON AND MOVE FORWARD THANKS A LOT FOR YOUR UNDERSTANDING, LOVE AND SUPPORT -D.IMMAN” he added. 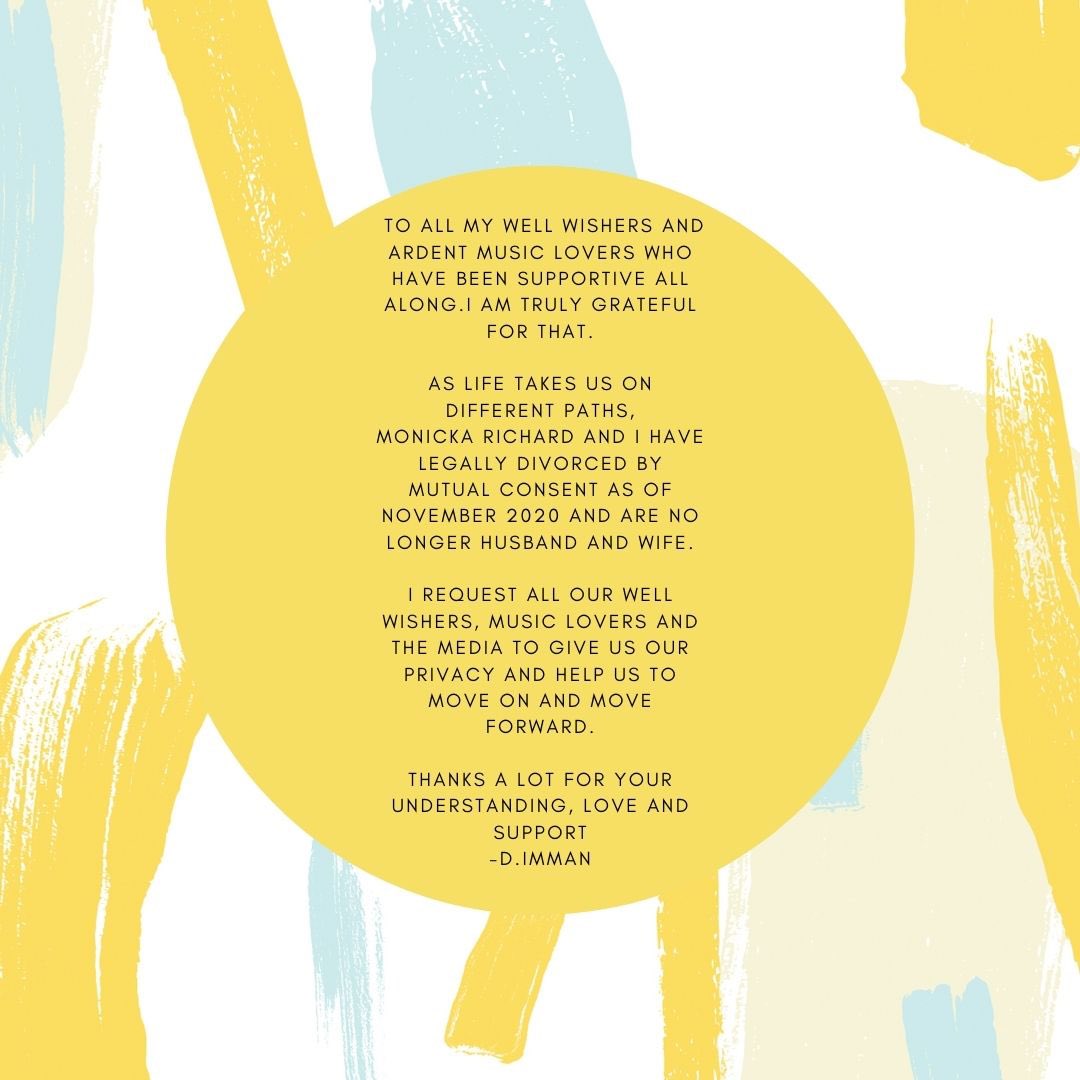 Now, nearly 5 months after his divorce, the music composer married Amali Uballd and announced about it to his fans and followers through his Instagram post. The music composer said that it’s an arranged marriage and it is helping him as a major remedy for all the hardship his family was going through in recent times. Imman also said that his wife’s Daughter Nethra will be his third daughter and expressed his anticipation over the homecoming of his two daughters Veronic and Blessica.

“Glad to share the news of my Remarriage
with Amali Uballd (Daughter of Late Mr.Uballd-Publicity Designer and Mrs.Chandra Uballd) on May 15th,2022 the Sunday.I’m ever grateful to my Father Mr.J.David Kirubakara Dass for being a strong pillar in my tough times. This
Arranged Marriage is a major remedy, a source of Joy to all life challenges myself and my family members faced last few years” Imman said through his post. 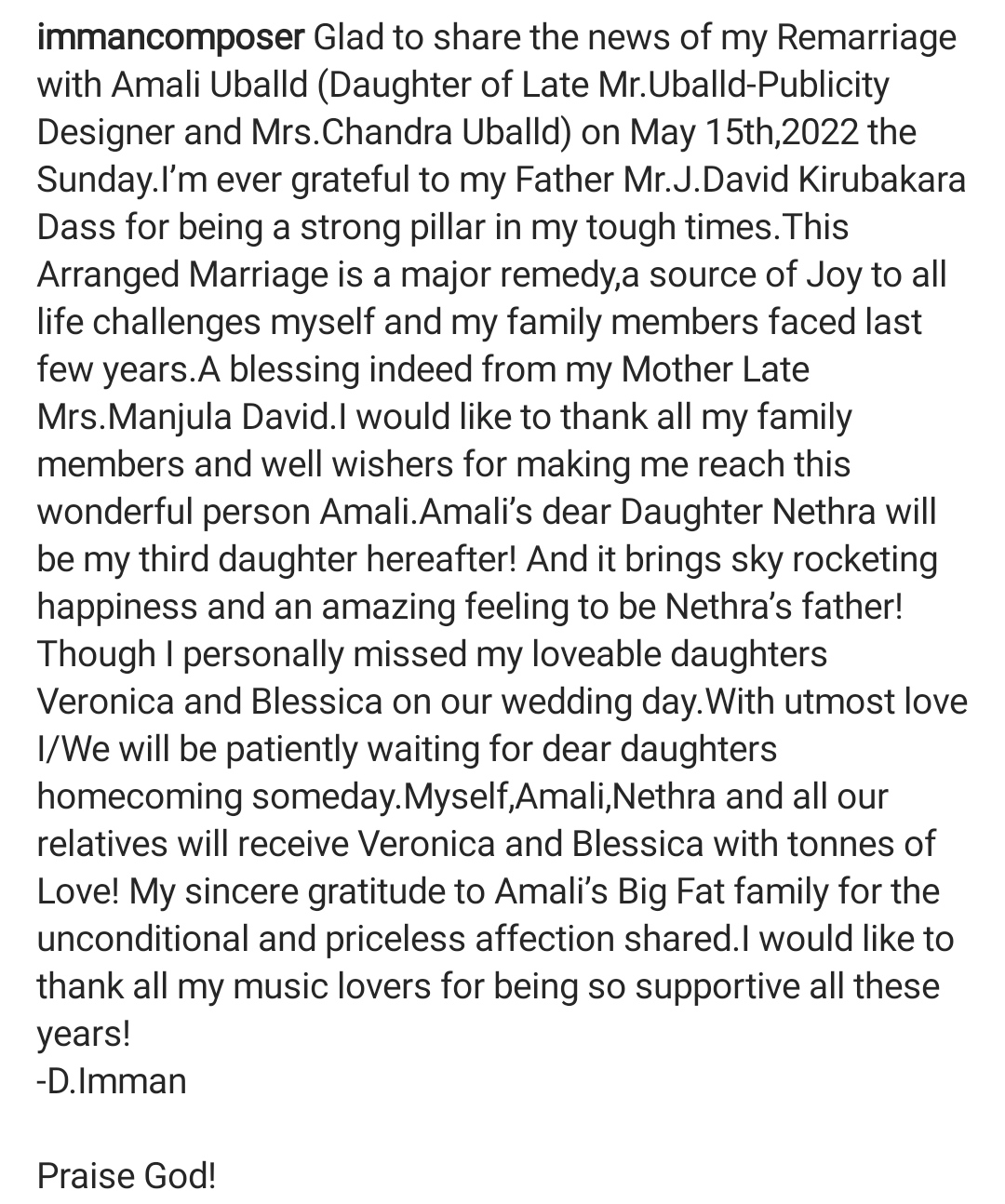 “A blessing indeed from my Mother Late
Mrs.Manjula David.I would like to thank all my family members and well wishers for making me reach this wonderful person Amali. Amali’s dear Daughter Nethra will be my third daughter hereafter! And it brings sky rocketing happiness and an amazing feeling to be Nethra’s father!
Though I personally missed my loveable daughters Veronica and Blessica on our wedding day. With utmost love/We will be patiently waiting for dear daughters homecoming someday” he further said.

“Myself,Amali,Nethra and all our
relatives will receive Veronica and Blessica with tonnes of Love! My sincere gratitude to Amali’s Big Fat family for the unconditional and priceless affection shared. I would like to thank all my music lovers for being so supportive all these years!” he added in his post.

Let us wish the music director to have a blessed and prosperous future ahead!!

Key Scene From “Cobra” Is A Copy?? Netizens Trolled The Director

The most awaited "Cobra" of Vikram released on the special occasion of Vinayakar Chathurthu with much expectations from the fans. After nearly three long...