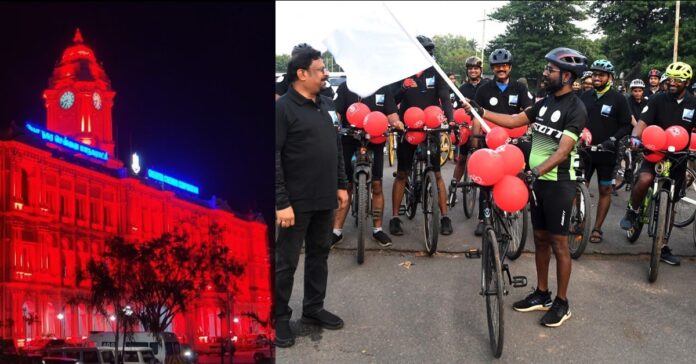 Mr. Arun Fernandez, founder of D Learners, an organization working for children with dyslexia, partnered with We Are Chennai Cycling Group, Smart Bike, CSIM, The Museum of Possibilities on Kamarajar Salai to a conduct cycle rally in a way of creating awareness for Dyslexia on Sunday. Over 200 people came together at the Island Grounds to cycle for the cause and the Ripon Building, DGP office were lit in red to create awareness about the same.

Being a learning disorder, Dyslexia involves difficulty in reading due to problems identifying speech sounds and learning how they relate to letters and words. In other words, it is called as a reading disability and it is a result of individual differences in areas of the brain that process language.

However, the condition doesn’t have any problems with intelligence, hearing or vision of an individual. In a way of marking “World Dyslexia Month” which is being observed across the world in October, The #CycleForDyslexia rally was organized to raise awareness among the public.

D Learners founder Mr. Arun Fernandez said that the focus of his organization was to highlight dyslexic thinking as a 21st century skill. “We want people to understand that dyslexia should not be looked at as just a weakness” he said who believed that such campaigns will find more ways to celebrate differences such as Dyslexia.

“This year’s theme for the World Dyslexia awareness month would help realign our focus on how individuals, organisations and the education system have continued to break through differences in learning styles and find more ways to celebrate these differences” Arun Fernandez of D Learners further added.

Along with the members of “We are cycling group”, college students, volunteers and wheel chair users participated in the rally with V. Nandakumar, an IRS officer, flagging it off.

The participants were provided a tour of space which is a demonstration centre for the assistive devices and technology for persons with disabilities at the Museum of Possibilities. They were also given a chance to engage with the process of how a person with dyslexia would read, write or do mathematics.