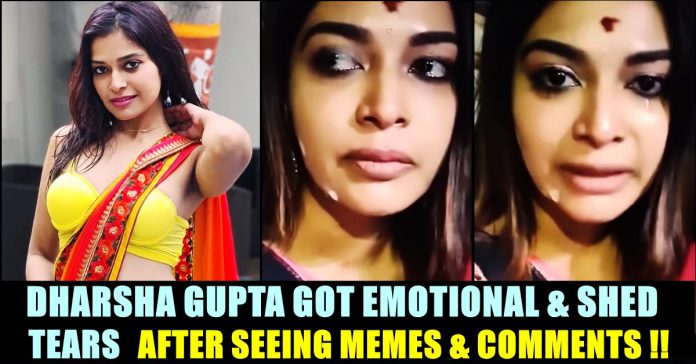 Dharsha Gupta of “Cooku with Comali” fame appeared in an Instagram live to interact with her followers to issue a clarification on the memes and comments which accused her of cheating small vendors who approached her to do online promotions. The upcoming actress who shed tears, said that she only tried to help those small vendors by not receiving money to promote their products but it ended up causing her trouble.

Lately, several memes targeting Dharsha Gupta for allegedly cheating small vendors by not doing promotions for them in her Instagram handle after receiving products such as ornaments, sarees, make up items from them were surfaced in social media platforms. On seeing one of her recent posts being filled with hateful comments based on the issue, Dharsha Gupta appeared in a live and gave her clarification by shedding tears.

“I was not aware of the memes which were being posted against me for the past four, five days. It is Pavithra who informed me about it and I came to know about the “spam” which I was totally unaware of. When I uploaded a post in Instagram, many people accused me of being a cheater and I saw comments which said that I didn’t upload posts for small vendors after receiving products from them” Dharsha Gupta said.

“I never approached any firm to do promotions. Even when they approach, I’d always refused to receive money from them as they are providing me sarees and jewels. Just to help them, I refused to get money” she said and went on to add that she accepted to do promotions without getting paid only to upload the posts to her comfort.

“I have been acting in movies and couldn’t spend time during my shoot days for promotions. Even when I intend to help them, their demand to upload posts within a particular time span hurt me a lot.” Dharsha Gupta said who got emotional while mentioning about the memes she witnessed.

“Many memes that got surfaced against me were abusive. One of the memes said that I am making use of other people’s money. Helping others even when I don’t have money is my character. I couldn’t bear the pain which made me to appear in this live” she said. “I am only helping those who run the small business and you can ask them whether I have received money from them or not.” said an emotional Dharsha.

Dharsha Gupta said that she reached the position after facing so much struggles and asked Instagram pages to inquire about an issue before accusing an individual to develop their page. On the work front, Dharsha Gupta is going to appear in “Ruthra Thandavam” of Mohan G who directed “Draupathi” and “Pazhaya Vannara Pettai”. She is currently enjoying 1 million plus followers in the photo posting social media platform by uploading 586 posts so far.