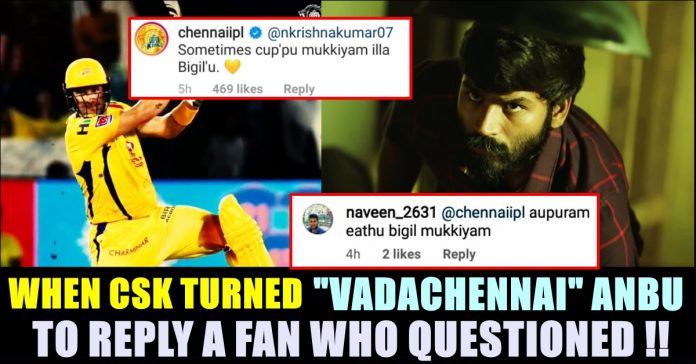 CSK’s Terrific Reply To A Fan On Watson’s Innings In 2019 Finals !!

Last year, on this same day, Chennai Super Kings faced Mumbai Indians in the finals of Indian Premier League 2019. Though the yellow team failed to win the trophy, the memorable innings of Veteran Australian Shane Watson won the hearts of Indian cricket fans. After being set a victory target of 150 runs, Chennai was restricted to 7-148 off its 20 overs.Watson scored 80 from 59 balls, but he was run out off the third-last ball of the match, with his team has to score four runs for the victory.

The veteran came into his own in the two knockout games, in the end, the Qualifier 2 and the Final. He scored a half-century versus the Delhi Capitals (DC) in Visakhapatnam in the second Qualifier to secure the team’s entry into the summit clash. In the Final, he had a patient start but converted it into a marvellous 80 off 59 deliveries with eight boundaries and four sixes while chasing a target. However, despite this valiant effort, Lasith Malinga bowled a superb last over which saw Mumbai Indians clinch the title by 1 run.

Only after Watson finished playing his innings, fans of IPL and Watson’s fellow teammates came to know that the cricketer was bleeding in his knees while batting for his team. Pictures of his knee leaking blood went viral across the internet with captions praising the senior cricketer. Now, on this special day, the official twitter account of Chennai Super Kings celebrating the special innings of Watson through their posts.

The CSK account which is known for its word play, wrote “Kneed we say more?” with a picture of Watson’s injury. Check out their post here :

This post garnered wide reach as it received more than 2 lakh likes so far. However, one of a fan of CSK expressed his regret on not winning the trophy despite of the struggle of the Watto man. “My Heart aches as we couldn’t win the trophy despite of his hard work” said the fan by writing “என்ன கஷ்டப்பட்டும் cup கிடைக்கல அதான் மனசு வலிக்குது 😢😢😢 “ in Tamil.

To this comment of CSK, a fan named as Naveen whose bio says that he is a cricket fan asked, what else is more important than winning a trophy. To this comment CSK replied with “Sanda Seirathu”

This reply received more likes than the first reply of the CSK handle which proves that fans of the team could relate more to this. This dialogue belongs to a film named as “Vada Chennai” in which the protagonist of it would say “Jeikromo Illayo Sanda Seinum” (No matter if we win or lose, we must fight) to his pals before involving them in a revolution.

Listen the original dialogue from the below teaser :

Followed by this, the team’s official handle went on to upload a special video on Watson’s innings with a caption saying “Meanwhile, on Neelambari’s TV… #KNEEngaVeraLevel #WattoMan”

Do you remember the terrific innings of the cricketer ?? Comment your views below !!

7 Important Things We Bet You Missed To Note While Watching “Kaala” : Hidden Politics !!

A high-voltage action-packed film with a strong political core, Kaala unleashes Rajinikanth in the garb of a 'real' character, instead of the unstoppable comic-strip superman that...