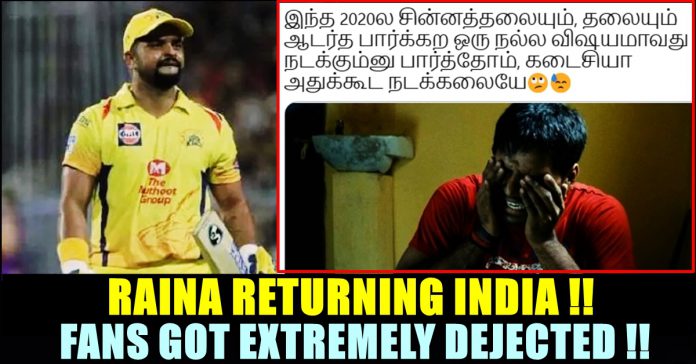 News on Suresh Raina returning to India due to personal reasons left fans of the team extremely dejected. The official twitter account of team Chennai Super Kings wrote “Suresh Raina has returned to India for personal reasons and will be unavailable for the remainder of the IPL season. Chennai Super Kings offers complete support to Suresh and his family during this time. KS Viswanathan, CEO” to let the fans to know about the update.

The news surfaced after a report on 13 members of the CSK team tested positive for COVID 19 virus in Dubai. The infected persons are understood to have been moved to a different hotel from the team hotel, and are being monitored by a medical personnel behind closed doors. As a result of this development, Super kings have been forced to postpone the start of their training in Dubai to September 1. As per the original schedule, the team has to start practicing on 28th of August.

Meanwhile, on hearing about Raina missing the the season, fans who fondly call him as Mr.IPL, got extremely dejected and are expressing their grief in social media platforms. Above all, the spot he plays for the team is hard to replace. It is notable that Raina have surpassed 400 plus runs in all the seasons of IPL tournament. The left handed batsman recently announced about his retirement from the International cricket along with his friend MS Dhoni.

Check out some of the reactions from fans regarding the news :

Whatever be the reason, if it’s something Personal, need to respect. Let’s give space to Raina and I hope it’s not something to worry and we pray for whatever be it. We are with you @ImRaina. Prayers and Support as always.

Comment your views on CSK playing the tournament without Raina !!

Previous article“That Scene Is A Prime Example To Prove Simbu” -Vignesh Shivan Lauded Simbu
Next articleSamantha’s Unexpected Reply To A Fan Who Asked About Her Pregnancy !!

Abhirami Venkatachalam, one of the Bigg Boss contestant who has acted with actor Ajith Kumar in the movie Nerkonda Parvai. The movie is awaiting...

Actor Rajinikanth who is fondly called as "Super star", "Thalaiva" and predominantly worked in Tamil film industry will be honoured with the 2019 Dadasaheb...