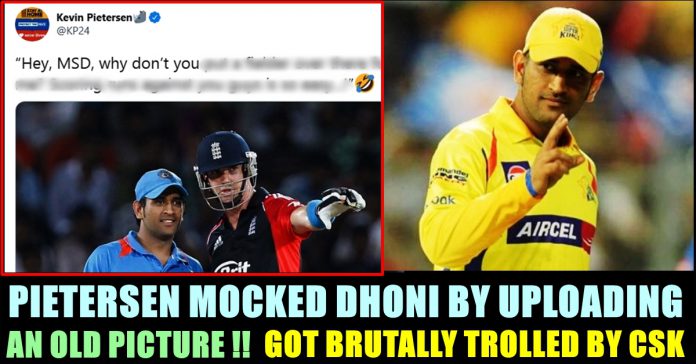 England’s veteran cricketer who is currently involved in commentary, is very much active in social media platforms. Known for his aggressive attitude on field, Kevin Pietersen continues to do it in pff field as well. In one of his recent tweet, Kevin posted a tweet in a way of trolling Dhoni and his captaincy only to be trolled back by his IPL team Chennai Super Kings.

Chennai Super Kings team is one of the most loved franchise in Indian Premier League tournament. The team not only loved by the fans who belong to Tamilnadu but also by the fans across the world. The reason behind it is nothing but the captain who leads the team since the inaugural season of IPL.

The social media account of Chennai Super Kings is very famous for their witty replies to the opponent teams and its fans. The account which is active throughout the year, would post about every current happenings of cricket related to Chennai. Now as the 12th season of the Indian Premier League got postponed without further notice, team CSK’s social media account is keeping its followers engaged as much as possible.

Kevin Pietersen who represented England in 240 International matches, posted an old picture of himself discussing to Dhoni about something on field, added a caption saying “Hey, MSD, why don’t you put a fielder over there for me? Scoring runs against you guys is so easy…!”. In the picture, we can see Pietersen pointing towards mid-on and saying something to Dhoni who was keeping wickets at that time.

“Hey, MSD, why don’t you put a fielder over there for me? Scoring runs against you guys is so easy…!”🤣 pic.twitter.com/OKVukkkSQD

The official twitter handle of CSK which saw this tweet of Kevin, came up an old picture which showed MS Dhoni making him out through “stumping” to troll back the tallest cricketer. They wrote “But sometimes you don’t need fielders!” as their caption.

This reply from the yellow team made netizens to laugh their heart out. This reply tweet received more than fifteen thousand likes so far and several number of hilarious reactions from its fans. Check out some of them below :

After serving a two-year suspension from the IPL starting July 2015 for the alleged involvement of their owners in the 2013 IPL betting case (along with Rajasthan Royals), the Super Kings returned to the league in 2018, winning the championship in the comeback season, its third overall to tie Mumbai Indians for the record for most IPL title wins. In the last season, the team went to finals and lost to Mumbai Indians by failing to score 149 runs in 20 overs.

“Most Asked Question” – Actress Replied To A Follower Who Asked About Her “B**b Size”!!

Actress Chandhini Tamilarasan who predominantly works in Tamil films and serials, in a recent question and answer session she conducted, responded to a follower...

Actress Kasthuri Trolled CSK For Their Slow Innings !! Trolled Back By Her Own Followers !!

Du Plessis' unbeaten 45-ball 43 has guided CSK to a comfortable seven-wicket win over KKR. Dhoni's men now go to the top of the...

Sivaangi Reacted To The Negative Memes That Surfaced Against Chef Venkatesh Bhat!!

Followed by Chef Venkatesh Bhat who has been uploading posts in his Facebook handle, reacting to the memes and trolls, Sivaangi, one of the...