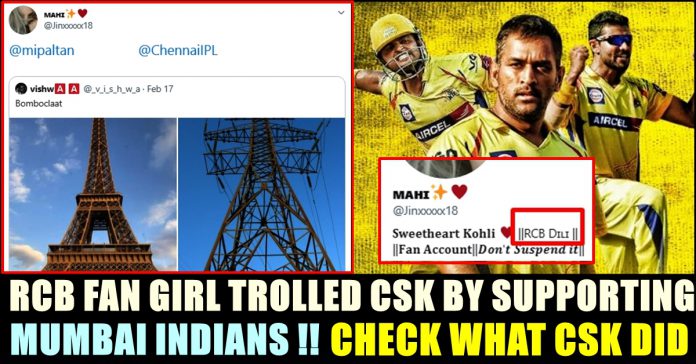 Chennai Super Kings reply to a fan whose Twitter bio said that he is a fan of Royal Challengers Bangalore goes extremely viral. The user replied to a tweet, in a way of trolling team Chennai Super Kings by supporting team Mumbai Indians. People who are constantly using twitter are involved in the recent trend “Bomboclaat” which is a process of posting a picture of a celebrity or a thing in order to ask their fellow Twitter users to tell what comes to their mind immediately after seeing the picture.

Check out his tweet which received more than 1000 likes below :

As we all know, The social media account of Chennai Super Kings is very famous for their witty replies to the opponent teams and its fans. The account which is active throughout the year, would post about every current happenings of cricket related to Chennai.

In a way of replying to this particular troll, Chennai Super Kings said that they are happy to be a transmission tower which gives electric power for people to charge their cell phones. CSK mentioned that people are capturing photographs of Eiffel Tower only by using the cell phone which requires electric power to operate. This clearly indicates us that CSK proved that their team is superior than the team mentioned by the troller.

“Happy to carry all the power so that someone gets to charge their phone and get a shot of the tower. ” read the reply tweet of CSK which is being celebrated by the fans of the franchise. Check out their tweet below :

Happy to carry all the power so that someone gets to charge their phone and get a shot of the tower. 🦁💛

Visit some of the reactions received by the reply tweet posted by them :

In that case forget towers….they don't even have lamp post🤣

This upcoming IPL season is most special one to its fans as MS Dhoni is going to enter the field after the semi finals of World Cup tournament. What do you think on this reply gave by CSK ?? Comment your views below !!

Previous articleIndian Man With No Job Wanted A Beautiful Girl To Marry !! Got Trolled
Next articleKamal Revealed Shah Rukh Khan’s Salary For Acting In “Hey Raam” !!

A man named Sanjeev Tyagi's way of welcoming a Zomato delivery agent who delayed for one long hour, has became a subject of internet...