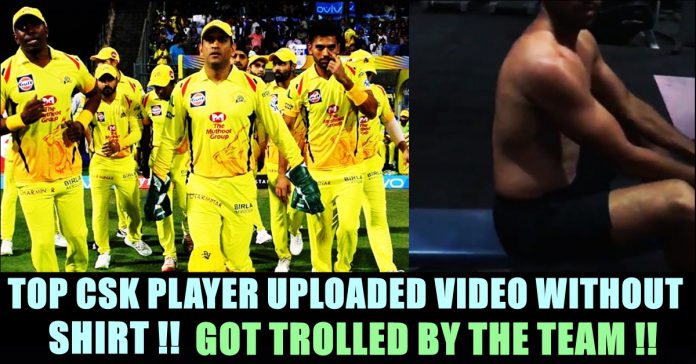 CSK Trolled This Top Player For Posting Video Without Shirt !! Check Out His Reply !!

We cannot forget the moment when this young lad got a piece of mind from the skipper of Chennai Super Kings, MS Dhoni and proved himself in the death over against Punjab team in a league game of 2019 IPL.

With Kings XI Punjab needing 39 runs off 12 balls, Dhoni handed the ball to Deepak Chahar who bowled two back to back full toss no balls. But after, the from Dhoni, Chahar come back strongly and even dismiss David Miller off the last ball of the over. A scolding from Dhoni saw Chahar come back on track and he finished the over giving away just 13 runs, after two free hits.

Now the 27 year old cricketer started to represent the country in T-20 matches and recently, in a T20I against Windies at Providence, Chahar also won the Player of the Match award for his brilliant bowling performance.

The cricketer who is very much active in social media platforms posted his work out video in his official Instagram account. In the video, Chahar was seen working out heavily without shirt. The caption of his post read as “Never stop #trainhard #upperbodyworkout #burenazarwaleteramuhkala😝🌚”. Check out the video he posted below :

To this post, one of his follower, in a way of trolling Deepak asked whether he forgot his shirt at home. To our surprise, the official Instagram account of Chennai Super Kings also joined him and trolled the pacer by asking whether he forgot it intentionally.

Deepak who witnessed these comments, immediately replied with a hilarious comment. “no tshirt became tight after workout so had to remove it 😛”

In a recent interview with The Hindu, Deepak Chahar has wished to impress as a batsman too. He hasn’t got many opportunities as a batsman in international cricket yet. In first-class cricket, he has already hit two half-centuries and has scored 965 runs in 63 innings with an average of 18.20.

In this November, India will host the three-match T20I series against Bangladesh. This series will run from 3rd November to 10th November 2019. As he has more than one month before this T20I series, he wants to work hard on his batting and prove himself as a batsman too. He was raised alongside his cousin, fellow cricketer Rahul Chahar who is sometimes referred to as his brother. His cousin sister Malti Chahar also became a popular face among CSK fans as she appeared in most of the matches that was played by Deepak Chahar.

Earlier CSK made a reply to one of a fan who asked the team about not picking Tamilnadu players in Chennai team. Fan Took Dig At CSK Team For Not Picking Players From Tamilnadu !! You Must See CSK’s Reply !!

Previous article“I Vote For Losliya” Said This Controversial Actress !! Got Trolled Hilariously !!
Next articleSTR Made His Come Back From Abroad !! INTERNET EXPLODED !!

Netizens Having A Field Day After The Release Of Ponniyin Selvan Posters !!

The most awaited "Ponniyin Selvan" first look posters were released by Lyca Productions on 2nd of March with the official confirmation on the film's...