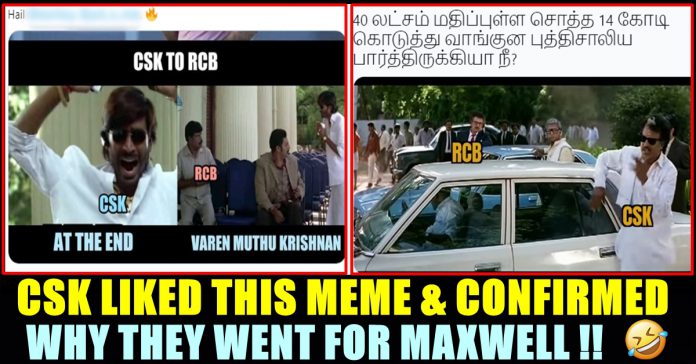 Team Australia’s batting all rounder Glenn Maxwell was sold to Royal Challengers Bangalore for Rs. 14.25 crore in the mini IPL auction is took place in Chennai on 18th of February. The cricketer who was playing for Kings 11 Punjab in the 13th edition of Indian Premier League was bought by the Kohli led team to fill the spot of a finisher.

The cricketer got sold for the mammoth amount after having a disappointing season. He managed to score just 108 runs in the 13 matches he played and got released by the Punjab ahead of the action. However, the cricketer is having an impressive overall record in the IPL with 1505 runs from the 83 matches he played at the strike rate of 154.67.

Team Chennai Super Kings and Royal Challengers Bangalore were trying to own the cricketer during the bid and the Virat Kohli led team won the race by spending rs. 14. 25 crore on him. The cricketer’s base price was Rs. 2 crore. For his national team, Maxwell has scored 1687 runs from 67 T20Is and is being considered as a prominent player for his team.

“Big Show Maxi is #NowARoyalChallenger! A huge warm welcome to the RCB #ClassOf2021.” wrote the official twitter account of Royal Challengers Bangalore after buying the cricketer.

Expressing his happiness, the cricketer wrote “Looking forward to joining
@RCBTweets for this years @IPL Can’t wait to put everything I have in to helping us lift the trophy!” in his tweet.

Looking forward to joining @RCBTweets for this years @IPL
Can’t wait to put everything I have in to helping us lift the trophy!

Meanwhile CSK liked a meme in Twitter which showed the popular auction scene from Dhanush’s “Thiruvilayadal Aramabam” and confirmed that they went for Maxwell only to increase the amount.

Check out the screen shots below :

However, fans of the t20 league who were keenly following the auction, started trolling Royal Challengers Bangalore for spending so much money on a cricketer who failed to hit a single six in an entire season. A follower uploaded a picture from popular Rajinikanth film “Annamalai” and made a meme trolling the Bangalore based IPL team.

Check out some of such reactions trolling the RCB team below :

RCB Management after CSK executives shake hands for not getting Maxwell #IPL2021 pic.twitter.com/hTuHhXqsP8

Actor Ajith and Vijay grabbed headlines after reaching their respective voting polls to cast their votes on the biggest day of Tamil nadu politics....

Who Will Be Declared As Winners If Match Abandoned Today !! : Here’s The Answer You Want to Know !!

Chennai Super Kings and Sunrisers Hyderabad somewhat escaped the frantic race for the knockout spots during the group stage owing to their consistent performances...