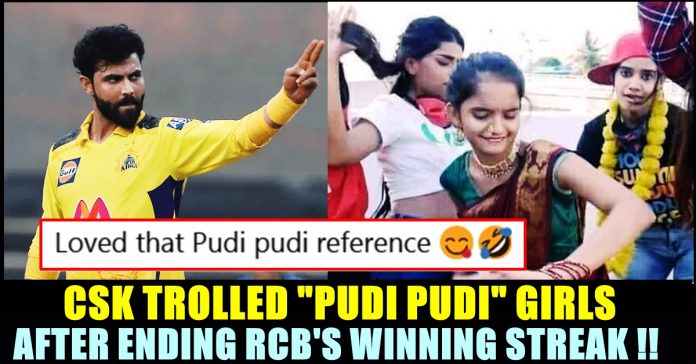 Team Chennai Super Kings climbed to the top of the table after registering a comfortable victory against Royal Challengers Bangalore. Ravindra Jadeja’s all round performance helped the team to clinch the victory by 69 runs. He won the Man of the Match award after creating a history of scoring 36 runs in an over bowled by Harshal Patel. He also picked three important wickets and caused a run out.

“He’s somebody who can change the game on his own and we have seen that significant change with the bat and in tj bowling as well. It’s good to give him that extra opportunity, the extra few balls where he can express himself. It’s also important that the individual grabs the chance when you take a decision like that and he’s done that so far. Also from a strategy point the bowler’s have found it slightly more difficult to contain the left handed batsman with the slog.” Captain Mahendra Singh Dhoni said about the performance of Jadeja.

“I have been working a lot on my fitness, skill and everything else, luckily, it paid off today. It’s tough as an all-rounder, you’ll have to do well in all departments – while training, I don’t do all the three things (batting, bowling and fielding practice) on the same day. I work on my skills one day and my fitness on the next day – that’s how I manage my workload. I was looking to hit hard in the last over, Mahi bhai told me he (Harshal) will be bowling somewhere outside the off-stump and I was ready for that. Luckily I connected with everything and we managed to reach 191, that was a crucial over from our side.” said Ravindra Jadeja after receiving the Man of the match award.

Social media fans of the team are celebrating the team’s victory as it was one of the most expected matches of the season. Meanwhile, official twitter handle of the Dhoni led team, came up with a tweet, trolling the most famous “Pudi Pudi” fan made song from RCB side.

“Aiyyao aiyayo “Pudi”chiruku! One happy #Yellove family with loads of magic and style!” CSK wrote as a caption to one of their posts which received wide attention fro0m the fans. Check out the tweet below :

Recently, a new set of girls dancing for a song which is similar to last year sensation “Kannan Devan Tea Podi” has got released in social media platforms. The girls who could be seen wearing the jersey of Royal Challengers Bangalore team, trolled CSK by singing “Horlicks uh Boostu, CSK Waste uh” which is similar to last year’s “Kannan Devan Tea Podi, CSK Pudi Pudi” and it became a subject to troll among the fans of team CSK right away.

Actor Jayam Ravi who is currently busy promoting his upcoming magnum opus "Ponniyin Selvan" of Manirathnam, in an event that was arranged for him...