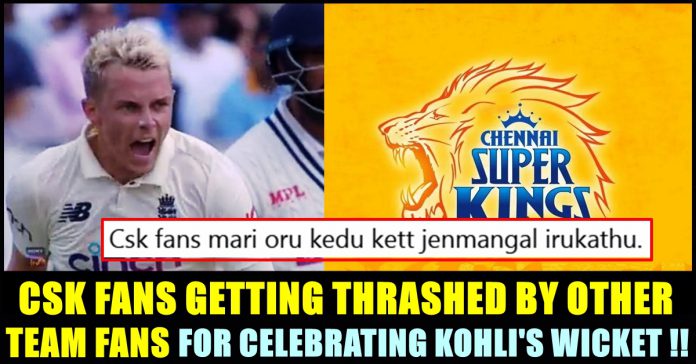 On Sunday, Mark Wood and Moeen Ali of team England struck late on against India at Lord’s to leave the second test heading towards an interesting fifth and final day. The visitors were 181-6 in their second innings, after bad light forcing an early close. Cheteshwar Pujara (45) and Ajinkya Rahane (61), both of whom had previously struggled for runs this series, checked England’s progress albeit it took them 59 overs to add exactly 100 for the fourth wicket. But from 155-3, India then lost three wickets for 20 runs.

To everyone’s surprise, Sam Curran captured the wicket on Indian captain’s wicket after Mark Wood dismissing both the openers of team India. The Left arm seamer denied Kohli’s wicket by an umpire’s call lbw ruling, still got him for 20 when he had the star batsman caught behind. Users of Twitter has been involved in verbal spat as soon as a CSK fan page lauded Sam Curran for dismissing Kohli.

The page named CSK fans Army which enjoys 91 thousand plus followers, uploaded the video of Kohli’s wicket and wrote “Sam Karan Supremacy” with fire and lion emojis. The post has been deleted by the page organisers after receiving so much hatred from fans of India who believe that Indian fans shouldn’t take sides with foreign cricketers during an International match.

Here’s the screen shot of the post of CSK Fans Army :

The post garnered wide reach with many spewing hatred at the fans of IPL team Chennai Super Kings for celebrating Kohli’s wicket. “These CSK fans hyping Sam Curran wtf, franchise over national team?? Then why to hype “3 ICC TROPHIES” thing, no wonder Dhoni is hated more because of his fans.” a fan wrote. However, fans of CSK team, including CSK Fans Army, came up with screen shots of other franchises such as Mumbai, Bangalore supporting their foreign players during an International match.

These CSK fans hyping Sam Curran wtf, franchise over national team?? Then why to hype "3 ICC TROPHIES" thing,
no wonder Dhoni is hated more because of his fans.

Well their accounts, their choice they can post whatever they want but I would just say that it doesn't look cool in any way.

Check out some of the tweets uploaded by CSK fans defending the post of “CSK fans army” :

Pipe down pals, CSK fans rooting for Sam Curran is normal thing like these tweets. pic.twitter.com/w7N7N9w3U3

Previous articleActress Lauded TN Police For Meera Mitun’s Arrest !!
Next articleFamous Hero’s Daughter Replied To People Who Made Fun Of Her Body In Style !!