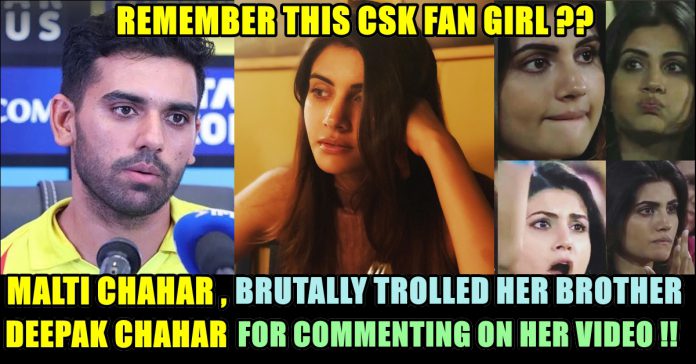 Chennai Super Kings (CSK) has a strong army of fans and followers who cheer for the team at every match. The Mahendra Singh Dhoni-led CSK side has seen several instances of crazy fan frenzy. One girl, in particular, has recently caught the fancy of netizens. She has been spotted cheering for the Men in Yellow from the stadium in several matches. Not just cheering, but her Instagram profile also boasts of her having met MS Dhoni and other CSK cricketers.

The woman who has captured the attention of cricket lovers across the country is Malti Chahar. And as her name suggests, she is related to Chennai player Deepak Chahar, who is a right arm medium pacer.

It has emerged that the woman is Malti Chahar and she is the sister of CSK pacer Deepak Chahar. Malti’s another brother, Rahul, is part of the Mumbai Indians squad, but hasn’t played in this season so far in the Indian Premier League (IPL) 2018.

And if you think her association with cricket ends at supporting CSK, you’ll be wrong. Malti enjoys playing cricket too and had posted a video where she is seen batting like a pro. Watch the video below:

For this video she received more than 1000 comments from her admirers. But the best part is her brother and the leading pace bowler of the trophy winning CSK team made effort to make fun of her batting style only to be get trolled by her. Here’s his comment on her batting style.

But Malti Chahar didn’t seemed taking care of his star value and she also even didn’t considered the franchise he belong. Right away she hit back her brother with a strong reply which is brutal. 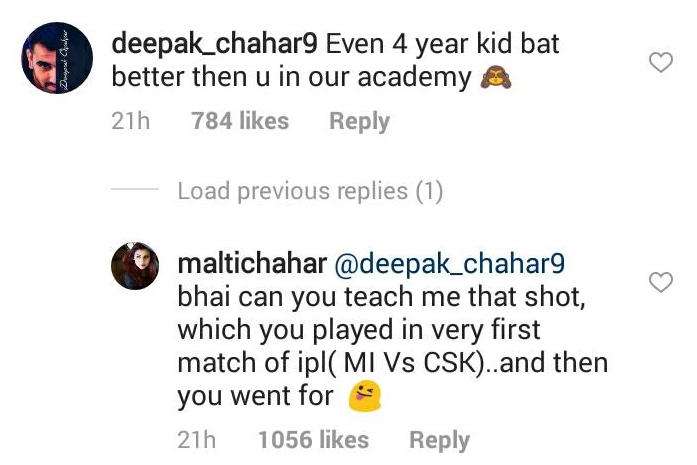 Fans enjoyed sister’s comment more than the brother’s which is evident through the number of likes. But this is not fair of Malti Chahar making fun of her brother’s one bad shot. ain’t it ?? Well, what do you think of their hilarious conversation ?