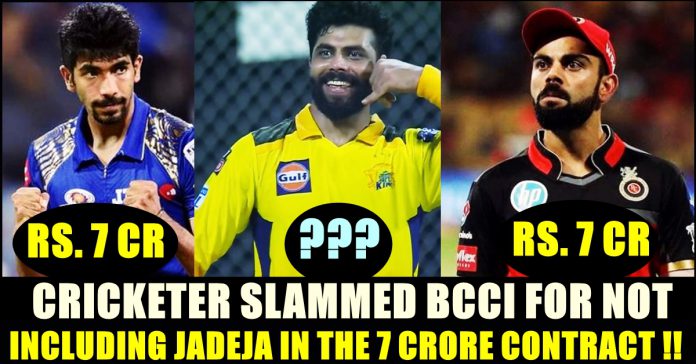 Team Chennai Super Kings registered their second win in the ongoing IPL tournament by defeating Rajasthan Royals at Mumbai’s Wankhede. After scoring a competitive total of 188 runs in the first innings, bowlers of the Dhoni-led team managed to restrict the opposition for just 143 runs and climbed to the second spot of the table. One of the main reasons for the yellow team’s victory is Ravindra Jadeja’s fielding effort.

He grabbed four catches in the match and was displaying some terrific athleticism in the field. Now, while the entire social media is celebrating the all rounder for his feat, former England cricketer and current commentator Michael Vaughan who is known for his controversial tweets against team India, has came up with a tweet slamming BCCI for not including Jadeja in the A+ category in the annual central contract.

As soon as the report surfaced, Vaughan came up with a tweet in his official twitter account writing “Disgrace, he should be on the biggest behind Virat”

Now, after seeing the all rounder’s fielding and bowling performance in the 12th league of the IPL 14, Vaughan said “That’s exactly why Ravindra Jadeja is so so so valuable to any team … How the BCCI don’t have him in the top contract bracket is beyond me … !!!!!!” in his tweet.

That’s exactly why @imjadeja is so so so valuable to any team … How the @BCCI don’t have him in the top contract bracket is beyond me … !!!!!! #IPL …

“He may not have the power like he used to with the Bat MSD,but he is still the best T20 tactician we have ever seen …” he said in his next tweet.

He may not have the power like he used to with the Bat MSD,but he is still the best T20 tactician we have ever seen … #IPL @ChennaiIPL 👍

Various kind of comments from the fans of team India surfaced for this tweet of Michael. Check out some of them below :

He isn't in top contract is our problem not yours .

Praise him for what he is not what he earns .

Why u poke your nose everywhere Mr.Michael its none of your business with BCCI and plz say thanks to MS for Sam Curran he is using Sam and Moeen better than Eng team

Changed two games for #CSK on it's own. He surely deserved A+ contract. #CSKvRR

Hahah lol we will not fall in your divide and rule trap 😂 ! U know jadeja was unfit in eng series otherwise he would have been there in this list

Dude, worry about how England team is filled with 50% foreigners now….
England will soon become a team with all its players imported!!!

Previous articleGaby Replied To People Who Commented On Her Ripped Jeans !!
Next articleDhoni’s Hilarious Comment From Behind The Stumps Grabbed Internet’s Attention !!

Bank Removed Its Employee After Seeing His Tweets Against South Indians ??

For past two days, a screenshot of a Twitter user named as Shubham Tripathi who claimed that he is an employee of Bank of...