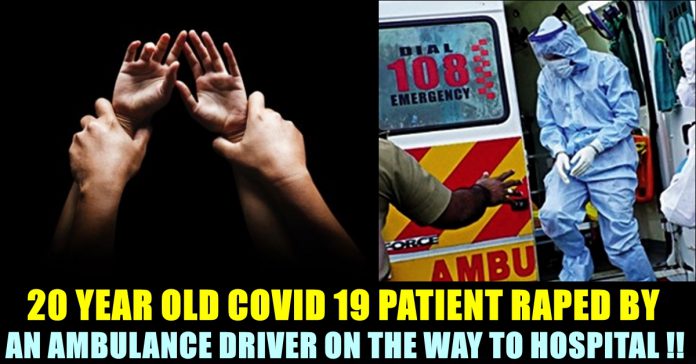 As the entire world is struggling to combat the global pandemic caused by the COVID 19 virus through maintaining social distancing, a shocking crime of an Ambulance driver raping a COVID 19 patient while shifting her to a COVID 19 special hospital has created hue outrage.

The 20 year old patient was subjected to such trauma in Pandalam of Kerala. The accused V Noufal of Kayamkulam has been arrested by the Police, under Indian Penal Code sections for rape while the private firm operating the Kaniv 108 Ambulance service has terminated him from service.

K G Simon, Police chief of Pathanamthitta district said the woman was being taken from her uncle’s residence at Vadakkedathukavu near near Adoor to the hospital. “She was picked up from the house around 10 PM and dropped at Adoor CFLTC., from where Noufal picked her up along with an elderly woman.

The accused committed the crime at a secluded place near Aranmula after dropping the other woman at Kozhancherry CFLTC, according to K G Simon. The incident came to light after the victim opened about the matter to one of a staff at Pandalam CFLTC where she was admitted. Police have reported that Noufal is a history sheeter. The superintendent of Police said the accused, who has been working with the Ambulance service for nearly a year, was booked for attempting to commit culpable homicide in an assault case in Alappuzha earlier.

This incident created huge outrage among the public. Terming the incident as extremely painful, health minister Shailaja said strict action would be taken against the accused. The state women’s commission and the state’s human rights commission has registered a case each and sought report from district police chief and from the state police chief respectively.

“As per regulations, an emergency medical technician has to o in the ambulance, but in this case only the driver was present. We do not know why the EMT was absent” Pathanamthitta district medical officer AL Shailaja said. BJP state chief K Surendran said that the incident highlighted the failure of the government. “We demand the resignation from the health minister” he said.

Cricketer Harshaban Singh shocked on knowing about this horrific incident who took twitter to express his emotion. “WTF Is happening . . The world has gone crazy” he said by adding angry emojis.

This is not the first time such case is emerging in country India. During April Month, National Commission of Women reported against a doctor who raped a woman at COVID 19 isolation ward. A 25 year old girl allegedly raped by a healthcare worker for two days in corona isolation ward in Bihar, the report said. The woman got admitted in an isolation ward at Anugrah Narain Magadh Medical college and Hospital. Her family members has accused a health care worker for raping the woman for two days. After being discharged from hospital, she died due to excessive bleeding at home. This incident has created major outrage at that time.

Previous article21 Year Old Student Committed Suicide After PUBG’s Ban !!
Next articleChennai Auto Driver Who Threatened A Man To Have Sex With Him Got Arrested !!