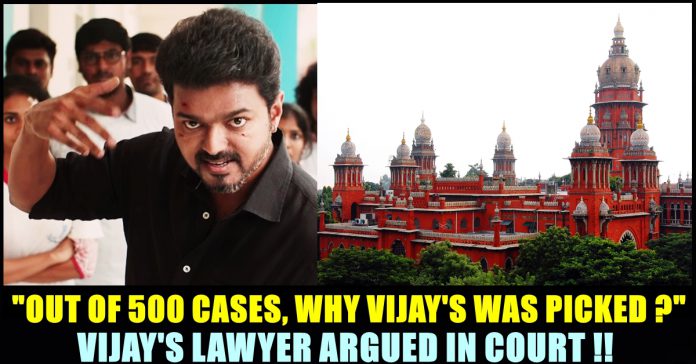 On Tuesday, The Madras High court stayed an order passed by a single-judge bench which had dismissed actor Vijay’s petition seeking the exemption of entry tax on his Rollys Royce Ghost which was imported from England. The single-judge bench slammed the actor and ordered him to pay the tax amount with a fine of Rs. 1 lakh. Appealing against the order which contained “harsh” criticisms, Vijay moved to high court again.

A bench comprising justices M. Duraiswamy and R. Hemalatha stayed the previous order passed by the single judge bench on 27th of July. Counsel of the actor submitted that the previous order contained “adverse remarks which created negative publicity” for the actor. The bench also stayed the Rs. 1 Lakh fine and asked the actor to pay the entire tax amount.

The court which has directed the tax department to issue a demand challan, asked the actor to pay the balance of the entry tax within a week’s time. Vijay moved to high court after feeling that the criticisms that were made against him were not necessary. His counsel moved the High court again, not against the tax but against the remarks made on him.

“Learned judge has cast aspersions on Vijay by labelling him as an anti-national and has cast aspersions on the whole acting community,” counsel of actor Vijay argued in court on Tuesday. “Out of 500 other similar petitions involving luxury cars, some even costlier, the case of Vijay cannot be picked out alone. Remarks need to be expunged. Costs were not awarded on any other cases” he further said.

“Actor Vijay is ready to pay the tax; every citizen is entitled to avail legal remedies to challenge the imposition of tax; to make derogatory remarks against a petitioner for availing a legal remedy is unjust” he further said and added “The same judge has dealt with other cases involving luxury cars with one-page orders, but in case of Vijay he passed remarks,” Vijay’s lawyer Vijay Narayan said.

'The adverse remarks created a negative publicity. This can be hurtful to any person' : Vijay Narayan.#MadrasHighCourt #Vijay @actorvijay

Judge Subramaniam of Madras high court imposed Rs. 1 lakh fine for actor Vijay who sought tax exemption on a luxurious car that got imported from England. He was asked to pay entry tax by the Assistant Commissioner of Business Taxation. Followed by that, Vijay filed a petition in Madras high court in the year 2012, seeking exemption for the entry tax.

Out of 500 other similar petitions involving luxury cars, some even costlier, the case of Vijay cannot be picked out alone. Remarks need to be expunged. Costs were not awarded on any other cases : senior counsel.#MadrasHighCourt #Vijay

Vijay's counsel requests the bench to direct the tax department to issue the demand challan within a week. "I don't want the issue to be hanging", the counsel says.

Bench directs the dept to issue the challan within a week to Vijay.#MadrasHighCourt #Vijay @actorvijay