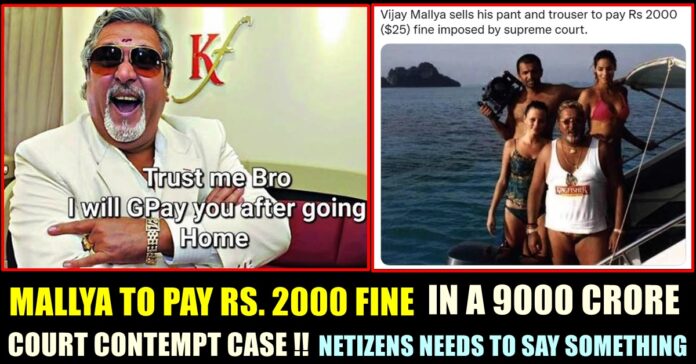 After Vijay Mallya was found guilty of contempt of court in 2017 for withholding information from the court, The Supreme Court, On Monday, awarded him four months of jail sentence. The apex court also imposed a fine of Rs. 2000 on him which grabbed the attention of the internet using citizens. 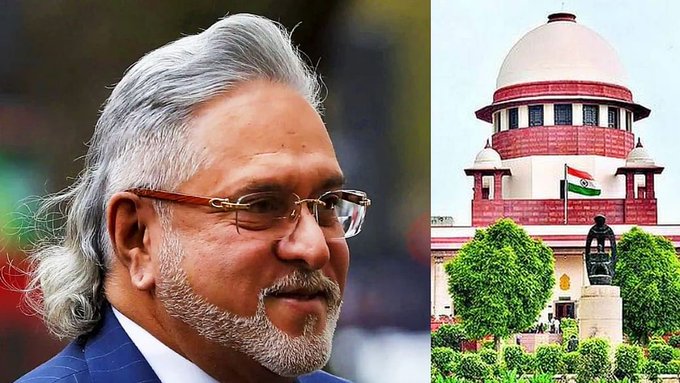 Rs. 2000 started trending in the micro blogging social media site with Twitterati flooding the feed with hilarious memes and reactions. Some users took dog at the old judicial system as well for not being strict to the offenders.

Here’s some of the reactions that are trending in the site :

Thinking of launching a crowdsourcing drive to collect the massive fine of Rs 2000 imposed by the Supreme Court on Vijay Mallya.

How can any ordinary law abiding citizen pay this much; and just to rub it in the hon’ble judges have even disallowed EMIs on it. Is this justice?

Vijay Mallya after knowing he has been fined for ₹2000 in a contempt case https://t.co/i27aaPZuff

That’s harsh, how will he afford to pay it ?

OMG that much big amount 😭😭
Vijay Mallya to SC pic.twitter.com/Wy6xplMMXt

Mallya transferred $ 40 million to his kids in violation of court orders!

5 years later, he is sentenced to 4 months imprisonment

AND ₹ 2000 fine for withholding info

If he doesn’t deposit cash in 4 weeks, with 8% interest, he faces another 2 month in jail

Right. Rs 2000 fine for Vijay Mallya, which, incidentally, is the same challan amount for overspeeding in Delhi NCR.

SC awarded 4-month jail and imposed ₹2000 fine on fugitive Vijay Mallya who was found guilty of contempt of court in 2017 for #withholding information from the court.

I don’t understand one thing that by the above Judgement whom have the Court insulted
🤔Itself or Mallya ? pic.twitter.com/K5TI020tV0

I have paid more than that on helmet and mask violation.

Seriously, how can they say that mallya needs to pay 2000 Rs.

Someone like that, former MLA, host who invited 6 SCI judges in his birthday party should pay 1 Rs at most, and 1 Rs as charges for running to another country

As if Vijay Mallya is planning to return to India to get imprisoned. What a joke??? And a fine of Rs. 2000. A red signal violation in a big city begets more fine. https://t.co/qMZssCB3lp

Heard that the fugitive offender Vijay Mallya ‘s lawyers have appealed to the Supreme Court to waive off the fine amount of
Rs 2000/- as it doesn’t befit the fraud amount of Rs 22,500/- crores that their client was involved in….

In addition, the apex court also asked Mallya to deposit back $ 40 million with 8% within four weeks, failing which would lead to attachment of properties.

The fugitive businessman who is in the UK since March 2016, was found guilty of contempt of court for transferring $ 40 million to his children, in a case filed by the State Bank of India. His counsel, meanwhile, maintained that in the absence of any instruction from his client, he will not be able to argue on the quantum of sentence to be awarded in the contempt case.

The top court had given the last opportunity of two weeks for Mallya to personally present himself or through his counsel in the contempt case, noting that they had waited “sufficiently long”. According to the court, Mallya was presented multiple opportunities to appear either personally or through a lawyer and had given specific directions in it’s order dated November 30, 2021.

Followed by Kollywood celebrities, the horrific lock up death of Jayaram and Bennix in Sathankulam of Thoothukudi made people across the country to mourn...

Actress Parvathi Nair who predominantly appears in Tamil and Malayalam films, recently conducted a question and answer session with her Instagram followers. She who...

A video of Bigg Boss contestant Azeem requesting the cash rich show's head not to telecast one of his videos, is going viral in...

Bigg Boss Viewers Got Shocked After Knowing About Myna’s One Day Salary!!

Viewers of the ongoing season of Bigg Boss show got shocked after knowing about Myna's one day salary to stay inside the house. Not...