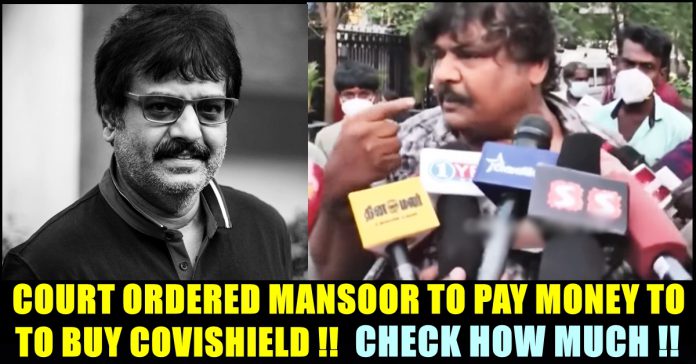 Followed by the case registered against Tamil actor Mansoor for spreading misinformation against COVID 19 vaccine, On Thursady, Madras high court granted anticipatory bail to the actor and directed him to pay money to purchase Covishield as a condition for bail. Justice M Dhandapani made the order of directing the actor to pay Rs. 2 lakh to Tamil nadu health secretary before getting bail.

A series of statements made by the actor regarding the health of actor Vivekh landed him in trouble. When actor Vivekh was admitted in a private hospital after suffering a heart attack on 16th of April, Mansoor Ali Khan who met the reporters in front of the hospital, blamed the vaccine shot Vivekh took on the day before.

The video of Mansoor Ali Khan making statements against COVID 19 vaccine went viral among the users of social media platforms. He alleged that Vivekh had suffered a heart attack only because of the COVID 19 vaccine that he took on 15th of April.

As soon as the news went viral on social media platforms, a complaint was registered against him by a health officer of the Chennai corporation. First information report under sections 153 (wantonly giving provocation), 270 (Malignant act likely to spread infection of disease dangerous to life) and 505 (intent to cause fear to the public) of the Indian Penal Code were registered against him.

The petitioner stated that the words uttered by the actor at the entrance of a private hospital was due to an emotional outburst and was never intended to hurt anyone. “The interview should never be taken by the authorities to be the one capable of creating panic and confusion among the members of the public” he added.

Mansoor Ali Khan has been acting in Tamil films since 1990 and his first break through came from “Captain Prabhakaran” in which he played the role of an antagonist. After acting as villain for a number of films, Mansoor also acted as a protagonist in few films.

At the 2019 Indian general election in Tamil Nadu, he contested from Dindigul as a candidate of the Naam Tamilar Katchi. It is notable that new age filmmaker Lokesh Kanagaraj mentioned his name recently and said that wrote his blockbuster film “Kaithi” by having Mansoor as a protagonist in his mind.

Previous article“I Will Not Shut Up, Keep Trying” – Actor Siddharth !!
Next articleTamil Cinema Mourns For The Demise Of KV Anand !!

Actor Shanthanu and Director Rathnakumar are having a tough time in Twitter since they signed Lokesh Kanagaraj's "Master" for acting and writing respectively. Fans...

FIR Filed Against The Man Who Threatened To Rape This Famous Director/Actor’s Daughter !!