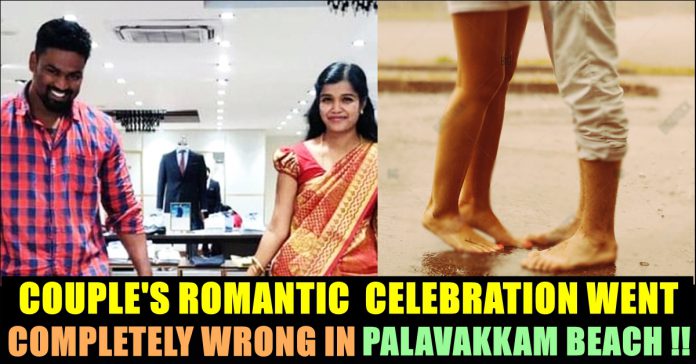 We have heard of many cases about children, youngsters, ladies, men, elders drowning into the sea accidentally while trying to play in it. This recent case about a Vignesh and Veni Sheila from Vellore left the entire state devastated as their attempt of celebrating their second year anniversary ended up as a tragedy. They who tried to exchange rings in the sea dragged by the strong waves of it. Veni, the mother of a 1 year old was killed and her body was found in Kottivakkam after an hour long of search.

Vignesh and Veni Sheila celebrated their second year anniversary on 6th of February which is on Thursday. Veni was a nurse at the CMC in Vellore and Vignesh is working with a textile firm. Hailing from Vellore, the couple who came to Chennai to celebrate their anniversary were staying at their friend’s residence. The parents of the one year old came to the Palavakkam beach with their 10 relatives and friends in multiple cars. After finishing their dinner on Thursday night, they went to the beach around 11 : 30 in the night.

“Two policemen on duty at that time saw 5 cars with 30+ people approaching towards the sea. One of the police warned them not to enter the water and the family moved away. Then they cut cake and celebrated on the shore” said ACP Vishwesharayya according to Indian Express.

However, The couple entered the sea around 11: 45 pm to exchange rings in the hip level water even when the strong waves were crashing on to the shore. “Veni suddenly dragged away by the strong waves, while Vignesh managed to reach the shore” said a source.

Friends and relatives who came with the couple immediately alerted the police who tried to locate Veni by using boats from the fishermen colony. But the effort went in vain and they only managed to locate Veni’s body in the Kottivakkam beach around 2 am. The body of her was sent to Royapettah government hospital for post mortem. Revenue divisional officer in Guindy has proceeded an inquiry on the case.

“This is not the first time such an incident is happening on the city’s beaches. We keep warning them against going into the water but the minute we leave the spot to cover rest of the area they are going into the sea. We need more barriers to prevent people from entering into the sea” said an officer according to The News Minute.

Watch : “What’s Wrong In Asking Share For My Own Song ??” Ilayaraja’s Shocking Statement !!

Zee Tamizh Editors To Be Nominated For Academy Awards This Year !! Their “CCV” Version Edit Got International Acclaim !!

The trailer for arguably the biggest multi-starrer of Tamil cinema this year, Chekka Chivantha Vaanam, which was released a week back, has raked in more than 8 million...