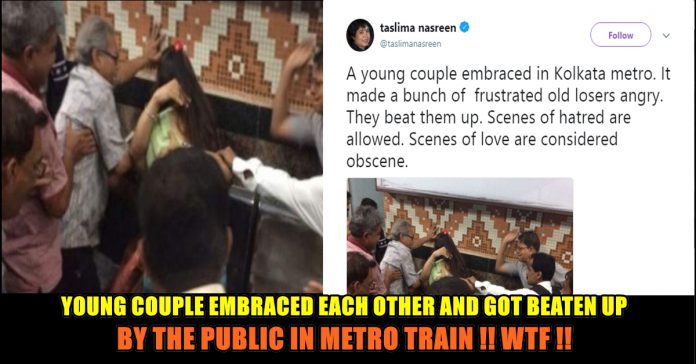 Couple In Kolkata Beaten Up Badly In Metro Train For Hugging Each Other.. SHOCKING!!!

A couple was reportedly beaten up for hugging in a metro train in Kolkata on Monday. The incident triggered protests at Dum Dum metro station, wherein the protesters demanded the arrest of the culprits. According to reports, the couple was beaten up by some elderly people travelling in the metro. Anandabazar Patrika reported that the incident followed a heated argument between the couple and the culprits. As the train reached the Dum Dum metro station, the couple was reportedly dragged out of the train to the platform and the mob started beating up the man.

Kolkata: Protest staged outside Dum Dum metro station demanding the arrest of people who had reportedly beaten up a couple for hugging in the metro. #WestBengal pic.twitter.com/5IeP7HOlD2

The first-hand narrative of an eyewitness along with photographs clicked by him were published in a Bengali daily on Tuesday. It stated that the incident sparked after an old man objected to the hugging of a young couple inside the metro coach near Chandni Chowk metro station in central Kolkata and culminated seven stations later in the mob violence in Dum Dum. “While the couple tried to persuade that they hugged to protect the woman from groping, the aged man refused to listen and argued that they were ‘polluting’ the atmosphere and suggested that they should instead visit a bar in Park Street. The boy gave prompt answers to the aged man’s remarks and smirked when he asked whether he thought he was Salman Khan. The other middle-aged male passengers got irked by the smirk and warned him of ‘dire consequences’ upon arrival of Dum Dum station,” the narrative read.

A young couple embraced in Kolkata metro. It made a bunch of frustrated old losers angry. They beat them up. Scenes of hatred are allowed. Scenes of love are considered obscene. pic.twitter.com/Jv4zNaMDe8

“When the train entered Dum Dum, the 5-6 middle-aged men dragged the couple to the platform and thrashed the boy black and blue. When the girl tried to save him, she was beaten up too by the irate men. However, finally, youth and women intervened and rescued the couple and escorted them out of the station,” the narrative added. However, police said they could not take any action as the couple had not filed a complaint.

Nevertheless, as soon as the report got published, youth took to the social media to criticise the act of the middle-aged men with some questioning about people’s morality and conscience when they keep mum when a woman is teased, groped or molested in full public glare in public transport throughout West Bengal.

A group of students held protests at Dum Dum station against the incident on Tuesday showcasing placards against moral policing. Speaking to The New Indian Express, West Bengal Women’s Commission chairperson Leena Ganguly said: “The accused might believe that hugging in public space might be against Indian culture and they could have protested. But, they have no right to take law into their own hands. I request the victim woman to approach us so that we can take the case forward.”

When IndiaToday.in got in touch with Kolkata Metro Railway regarding the issue, the call was forwarded to the metro railway’s CPRO without any comment.

An official at the CPRO said that no police report had been filed regarding the incident.

“No passenger has registered any police complaint yet,” the official told IndiaToday.in. “We are, however, looking into it.”

Due to the rain that playing a spoilsport in the 5th and final T20 match, the series tied with 2-2 and both the teams...

“Many Celebrities Wished Me Personally” – Mohan G’s Emotional Reply To A Fan !!

Mohan G, trailer of whose film released recently, replied to a fan in the micro blogging social media site who appreciated him after watching...