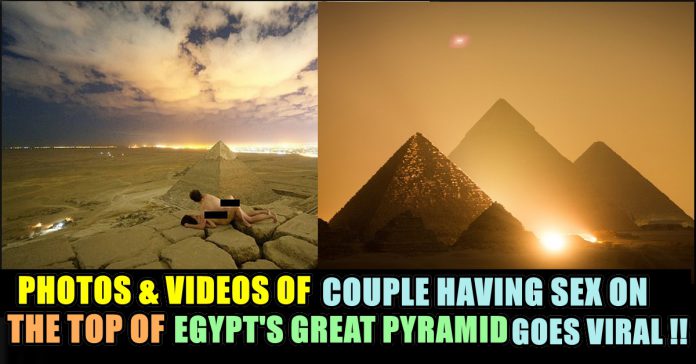 Social media is such a place where anything and everything can go viral in like minutes. From the past few days, a picture and video of a couple are going viral on the internet like crazy in which they can be seen having sex on the top of the Great Pyramid of Giza. A Danish photographer named Andreas Hvid shared this picture of himself having sex with a girl in the missionary position on the top of the pyramid and ever since it has created a controversy.

Not just on his website, he even shared a video of the same on YouTube in which the couple can be seen climbing on the top of the 4,500-year-old pyramid. Soon people started to claim it as a fake picture but the Egyptians demanded an investigation into the matter as they are calling the matter as a violation of public morality. The video was first deleted and then reposted on Hvid’s page in which the girl too was seen removing her top. In an interview with Copenhagen-based Ekstra Bladet, Andreas Hvid said he has always dreamt of climbing the Great Pyramid and taking naked photos over its top. He added that he is now very upset as some people are mad at him.

In the description of the video that was posted, the photographer wrote, “In late November 2018, a friend and I climbed the Great Pyramid of Giza (aka Pyramid of Khufu, Pyramid of Cheops). Fearing to be spotted by the many guards, I did not film the several hours of sneaking around at the Giza Plateau, which led up to the climb.” The video also has a link to the ‘nude art’ photo but the face of the girl was blurred. Scaling one of the seven wonders of the ancient world is forbidden as the visitors are only allowed to climb up to a certain level and that too before 5 pm. Many people including Mostafa al-Waziri, the head of Egypt’s antiquities council, said that the picture might have been edited using a photo-editing software but if it is found to be genuine, they will be punished.

In the third time, Hvid seemingly managed to reach the top. He said he and another Danish friend took a different route away from the guards, and waited until tourists left the Pyramid. They climbed and could reach the top in 25 minutes only, he said.

Hvid said he did not have sex on top of the Pyramid, confirming that they have taken one photo while they were naked.

The Danish photographer said he did not intend to mock a historic or religious symbol, adding that he will not visit Egypt in the coming period in order not to get arrested.

Now the Egypt’s Ministry of Interior arrested a camel driver and another girl accused of helping two Danish tourists climb the Great Pyramid of Giza. The tourists photographed themselves naked allegedly on top of the 139-meter pyramid.

An investigation team was formed in cooperation with the Interior Ministry to investigate the issue. The 33 year old Danish photographer reached Egypt on November 19 and left on December 4, according to the investigation.

In an interview with Copenhagen-based Ekstra Bladet, Andreas Hvid said he has always dreamt of climbing the Great Pyramid and taking naked photos over its top. He added that he is now very upset as some people are mad at him.