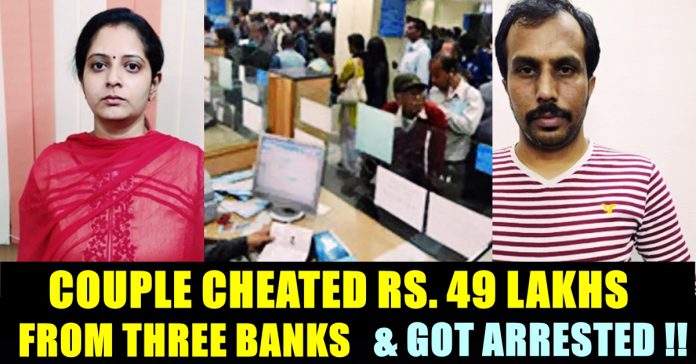 A Couple in Erode cheated Rs. 48 lakhs from three banks in the disguise of Entrepreneurs and got arrested by the Police after the bank discovered about the fraudulent.

The couple named as Radhika and Karthick submitted fake documents and obtained various kind of loans from different banks and got arrested by the Erode District Crime branch police. The incident came to light after D. Priyasre, manager of Canara bank registered a complaint to Superintendent of Police T. Thangadurai reporting the fraud.

The complaint said that a 38 year old Radhika.K of New Teachers colony, an account holder in the bank branch at Thindal, approached their branch at Villarasampatti on October 13. She reportedly claimed that she was a branch manager at a private insurance company in Erode and seeked car loan.

Report suggests that Radhik submitted her salary certificate, copies of income tax returns, her identity card and other documents to the bank in order to get the loan. After receiving the documents, the Bank sanctioned a loan of Rs.19 lakh and issued her a cheque in the name of an automobile showroom in Coimbatore.

As Radhika didn’t submit the original invoice and related documents, the branch approached the showroom which said that the car was registered in the name of her husband Karthick and the cheque was also encashed. During the vehicle registration, the loan details were also not disclosed. The manager who realized that the couple have cheated the bank by submitting fake documents , approached police.

When the Bank administrators reached the address they provided, they came to know that it was a fake one. When they checked other documents, they realized that the couple had cheated. Superintendent of Police T. Thangathurai ordered the District crime branch to file a fraudulent case against the couple.

During the investigation, it has been discovered that the couple were hiding in Coimbatore. Police officers reached their location and arrested them after rounding them up. They were lodged in prison after facing the judge and the two cars were also seized.

The official twitter handle of BJP Bengal promised free COVID 19 vaccine for the people of the state after coming to power through one...