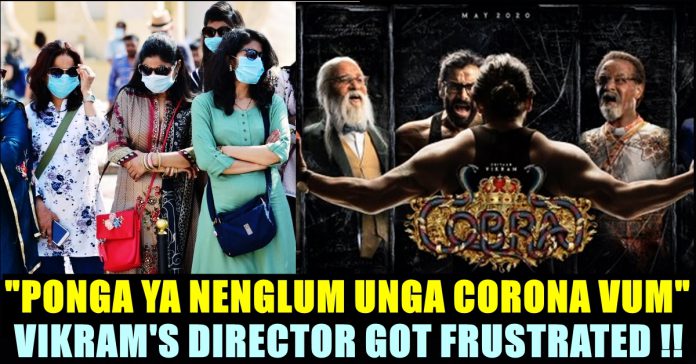 The impact Coronavirus is having today across the world is scary indeed. Renowned Hollywood actor Tom Hanks who is known for providing some quality films such as Forrest Gump, Catch me if you can announced that he got affected by Corona which shook the entire world. The actor, through his official twitter account said that he and his wife got attacked by the virus while they are spending their time in Australia.

Due to Coronavirus, a big question mark raised regarding the upcoming IPL tournament. The movie releases in Kollywood are also likely to get postpone due to the deadly disease. Now, director Ajay Gnanamuthu who is known for making films like “Demonte Colony”, “Imaikkaa Nodigal” has made an important announcement about his next film with actor Vikram and how it got affected by “Corona”.

The director and his crew was forced to leave Russia during the mid way of the shoot of “Cobra”, first look of which was released recently. Sharing the news, Ajay expressed his dejection over the rule made by the Indian government. “Corona attack for #Cobra. Packing up shoot in Russia halfway due to the travel ban rules by Indian Goverenment!! Pongaya neengalum Unga corona vum!!” he wrote in his tweet.

Earlier he replied to a news which said that the crew of “Corona” had the guts to shoot for the film even after knowing about the virus. On seeing this news, Ajay said that he and his crew only knows about the fear in a light manner.

Cobra is going to have Chiyaan Vikram in several getups which is evident through the first look released by the makers of it. The film’s music is going to be composed by A.R Rahman.

As far as state Tamilnadu is concerned, Health Minister Vijaya Bhaskar has said that there is no new cases of Coronavirus were reported. He asked the citizens not to believe in rumours which is spreading through social media platforms such as Facebook and Whatsapp. “Though there is no medicine to cure the medicine, But we have cured a 45 year old man from Kancheepuram by using symptomatic and supportive treatment” he said.

My talk in the assembly today on the topic of discussion #Corona. This has answers to doubts you may have about #Corona & how we tackle it. #TNAssembly #TNHealth #CVB pic.twitter.com/uwTrDQdZm0

In India, many cases in different states were reported and the remedies are being taken against the deadly virus. The lethal disease has killed more than 1100 people in China and has spread to over 20 countries across the world.

Madhavan Reacted To The Trolls & Criticisms On “Panjangam”!!

Madhavan, in a recent interview for the promotion of his upcoming film "Rocketry : The Nambi effect", talked about the percentage of people in...