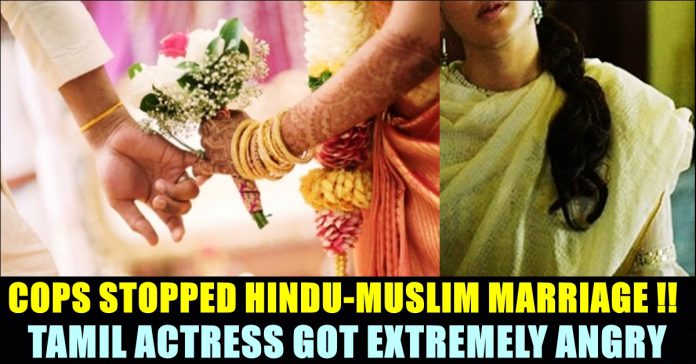 In Lucknow, Police officers stopped an interfaith wedding, reasoning the newly passed Uttar pradesh Prohibition of Unlawful conversion of religion ordinance, 2020, after receiving complaints from Hindu outfits. Police officers intervened on the day of the wedding, despite consent of the families of the Hindu bride and Muslim groom to it.

A team from Para police station reached the spot when the final preparations of the wedding were on. They asked the couple to seek clearance from Lucknow District Magistrate first before conducting the marriage.

The wedding was to take place by following the Hindu rituals. The families of the 22 year old bride and the 24 year old bride groom have agreed to wait till the approval from the District Magistrate, said the Police officers who stopped the marriage.

The police officer further informed that the boy wanted to convert into Hindu and get married to the girl. “The families were made aware of the provisions in the presence of their lawyers. They have given in writing that they will seek permission from the District Magistrate and then go ahead with the wedding” said Ravi Kumar, DCP of Lucknow.

The news has made the headlines nationally and people were reacting in various ways. Actress Tapsee Pannu who has been vocal about social issues, got extremely upset of seeing the news and expressed her frustration through the micro blogging social media site. The actress who is known among Tamil audience for acting in films such as “Aadukalam”, “Game over”, asked the younger generation to add this in their “to do” list.

“So now the parents’ nod is not enough. We need to apply for government permission to marry. Future generation please add this to your marriage ‘to do’ list. And then they complain institution is dying” read the tweet of Taapsee.

So now the parents’ nod is not enough. We need to apply for government permission to marry. Future generation please add this to your marriage ‘to do’ list.
And then they complain institution is dying 🙄 https://t.co/aZsWkBEAPW

A police officer updated that when they reached the wedding revenue, preparations had begun for the Hindu ceremony, according to reports.

Previous articleEngland Player Criticized Chahal’s Entry As A Concussion Player !! Check Reactions
Next articleSehwag Opened On Buying Natarajan For A Huge Price For The First Time !!