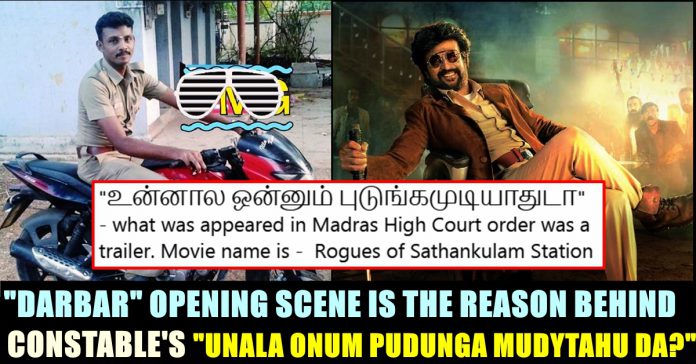 The atrocious behaviour of Sathankulam police officers has no ending it seems. The latest report that emerged, has said that the magistrate appointed by the Madras high court to probe the alleged custodial deaths of a father and son duo in Sathankulam, has written to the court saying that the officers who are involved in the case, had destroyed evidence, did not cooperate in the investigation, and had tried to intimidate the judicial team.

Bharathidasan, Kovilpatti Judicial magistrate has told the court that the behaviour of police officers forced them to stop the inquiry mid way on Sunday night and to leave the sathankulam police station, where P Jayaraj and Son Bennix were allegedly tortured which led their death that took place on June 22.

Followed by the incident, the High court Monday directed the district collector to depute revenue officers to take control of the sathankulam police station. The court also initiated criminal contempt action against ASP D Kumar, DSP Prathapan and constable Maharajan, named by Bharathi dasan in his complaint. On Monday, Tamil nadu government announced that they are transferring probe into the deaths of Jayaraj and Bennix to the CBI.

The magistrate’s note to the High court, confirmed the physical torture Jayaraj and Bennix went through by police officers. The note said that the witness had testified that “both son and father were beaten by Lathis throughout the night, till early hours”. The blood stained lathis and the tables on which the menb were made to lie down were wiped later. The magistrate said that the lathis were not submitted upon their initial demand but later submitted after insistence.

The judicial team reached the Sathankumlam station around 12.45 PM on Sunday and two senior police officers ASP Kumar and DSP Prathapan made no efforts to acknowledge the presence of the judicial team. Instead, Kumar “flexed his muscles and biceps” said the complaint.

When the Judicial team asked for daily register and other documents for inspection, the senior police officers exposed their displeasure by abusing their subordinates and ordered them with “threatening” tone. The required documents were brought one by one to delay the inspection, said Bharadidasan in his complaint, according to sources.

After the Judicial system taken the photos and videos of the station premises, Bharathi dasan said that they called constable Maharajan for interrogation at first. He said that the constable was not “forthcoming” and at first he “appeared scared”. But later at one point, Maharajan came close to the magistrate, and reportedly said “Unnala onnum Pudungamudyathu” in Tamil.

When he was asked for his Lathi, Maharajan, initially said that it is at his native place and later said that it is at the police quarters. He reportedly walked off during the interrogation, refusing to cooperate. “Finally he said that he has no Lathi” Bharathi Dasan wrote in his Lathi.

Head constable Revathy who was present on the night of June 19 is the only Police official agreed to sign her witness statement after they assured her protection. However, after that, the judicial team decided to leave the station after feeling that the situation was worsening. The police men reportedly gathered under a tree and openly abused the Judicial team. The magistrate’s complaint said that their intention clearly was intimidation of witness.

This incident created huge outrage in social media platforms. the public are not at all happy with the behaviour of the police officials who are accused of killing two innocents. Many expressed their disappointment over the attitude of the police officials and Vikraman who works as a journalist said that he feels that the opening scene in “darbar” might be the reason for constable Maharaja’s behaviour.

Rule by money … We need to see Law and politics as different entity … Instead of keeping humans as Judges we need to keep robots to write Justice then oly India will be corrupt free ….