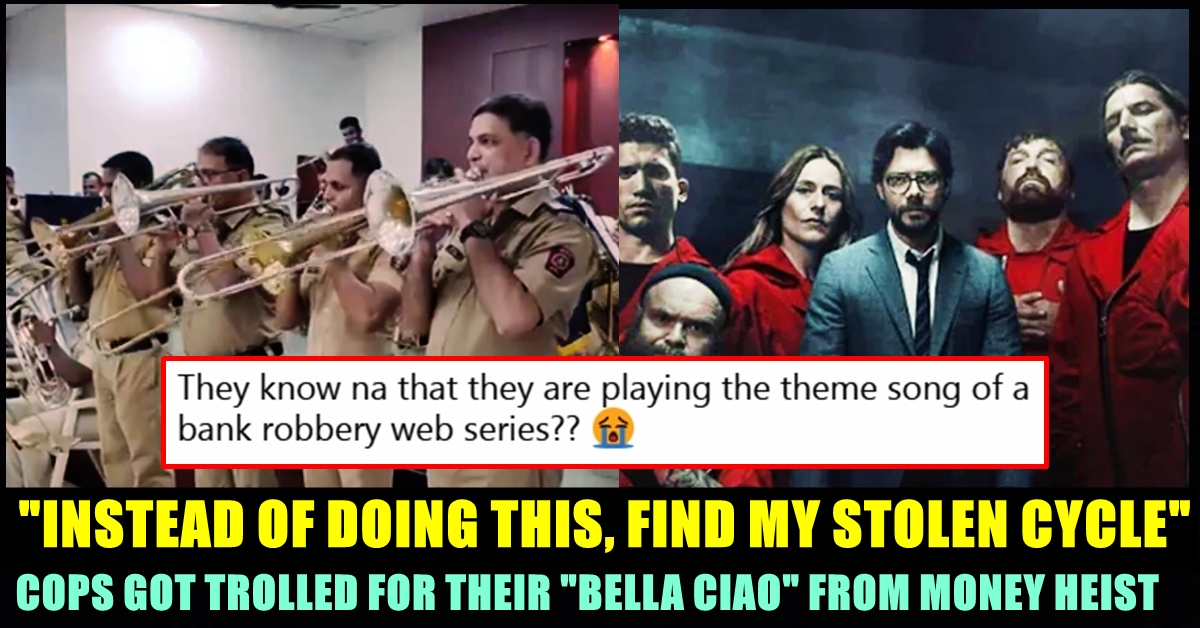 Release of Money Heist season 5 has made fans of the series go gaga in social media platforms. Numerous posts related to show are flooding in the feeds of social media platforms. The famous anthem of the series “Bella Ciao” is being played from all the directions of the Internet with different kind of renditions. Originally an Italian folk, the song became huge sensation after it got used in the series. The latest addition to the hundreds of version emerged from Mumbai Police and the video is going viral as well. Trolls criticizing the Police officers is also surfacing as soon as the video started getting widely circulated.

“Always trying not to miss out on detections- nor on trends & tractions! We’ll be here, never letting the season of safety end, while you race against time to finish this one! KhakiStudio planning to pull a heist on your heart one more time with #BellaCiao” read the caption of Mumbai Police’s Instagram post read which shows the video of a bunch of Police officers performing the song.

The video garnered wide reach among the users of social media platforms with various kind of reactions. Many pointed out the origin of the song and few said that it used in the series after stealing money. “Dear mumbai police hope you r now police not a band company” a comment of a user read whereas another asked the police to find him his stolen vehicle instead of performing such things.

Y'all commenting about money heist without knowing the origins of the song is funny lol. This is an anti-establishment protest song…and the police is playing that. The irony! https://t.co/511qHppSCd

Cops covering an anti establishment song with such gusto is what I wanted to see today 😌😌 https://t.co/RTmuPCCVrq

They know na that they are playing the theme song of a bank robbery web series?? 😭 https://t.co/ZKnWTkGSlr

Never ever in my life, I thought I will wake up to cops playing an anti-fascist folk song!
Romba nandri #MoneyHeist https://t.co/KwN46oQXLM

Cops covering an anti-establishment protest song that was used in a web series about a bank robbery.

I love this planet sometimes. https://t.co/mNq8UX8rpA

Fans for La casa De papel aka Money Heist is increasing in India in daily manner. As the fourth season of the series released last year, people of the country who were finding ways to kill the Quarantine boredom, started watching the series in Netflix. We have been witnessing many memes and videos in social media platforms regarding the series for past few months. Comment your views on Mumbai Police performing “Bella Ciao”.

Vijay Sethupathi Lauded DMK Government !! WATCH
“We Lied To The Security Of WWE To Enter” – Youths After Going Viral With Their Tamil Placard