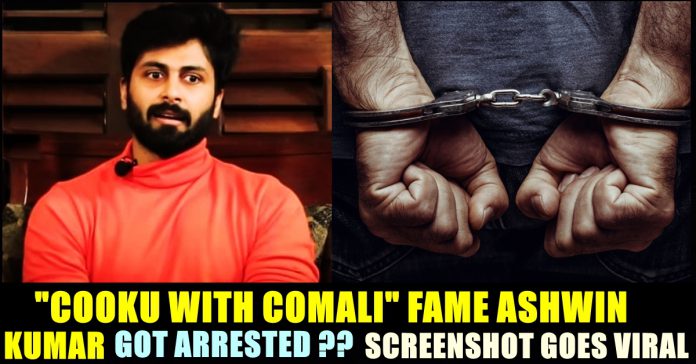 Ashwim Kumar of “Cooku with Comali” show gained a separate fan base through his participation in the cookery show. After acting in a number of TV serials, Ashwin got an opportunity to take part in the reality game show of Vijay Television. Many people, especially girls started loving him for his charming looks and calm attitude. The combination of himself with Sivaangi has a separate fan base which is evident through the comments that are surfacing in social media platforms.

The emerging actor is currently enjoying 3 million plus followers in Instagram after uploading 272 posts. He who appeared in music videos and in a number of short films so far, got committed in a film named “Enna Solla Pogiraai” as lead actor. He often finds a spot in the trending list of twitter due to the fan base he gained through the “Cooku with Comali” show. Recently, a story shared by the 27 year old went viral and helped media portals to make stories about it.

It was a meme made by his fans to tell how deep his female fan base is. Highlighting it as a “BREAKING NEWS”, the meme contained a picture of Ashwin and said “Actor Ashwin Kumar has been arrested by the Police for stealing many girls heart”. Reacting to the post, Ashwin shared it in the story section of his official Instagram account and wrote “Heart beat skipped for a second” with a laughing emoji.

Apart from acting in a feature film, Ashwin is also pretty much active in his Instagram by uploading pictures from the photo shoots he has been participating in. Check out some of his recent posts below :

Previous articleWoman Continues To Accuse Arya Even After The Arrest!!
Next articleNon-Selection Of Ashwin Created Outrage In Online Medium !!