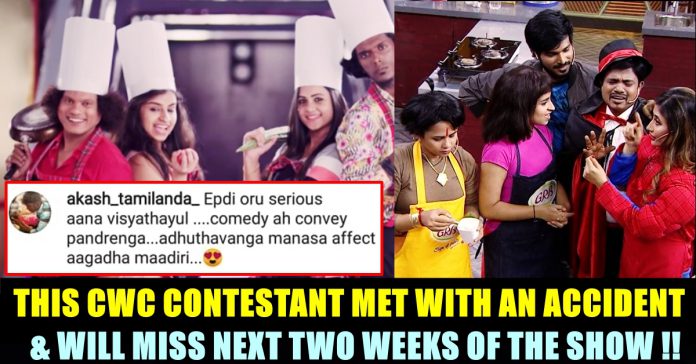 “Cooku With Comali” Contestant Won Internet With Her Philosophical Post !!

Manimegalai, one of the prominent contestants of the most talked about “Cooku with Comali” show, won the hearts of her followers bu uploading a philosophical post in her Instagram account. The former sun music host also updated that she met with a minor accident and wouldn’t participate in the upcoming shoot of “Cooku with Comali”. She also advised her followers to be careful while handling hot water.

The reality show “Cooku with Comali” which became a huge hit, demands a seasoned cook to join hands with a comedian to make delicious food items in order to impress the judges of the show. The show became a huge hit among the Television and Internet audience. Not only the women, even youngsters including college, school students started celebrating the show as it mainly concentrates on providing humour unlike other cookery shows.

TV anchor Manimegalai who rose to fame through hosting shows in Sun music, gained widespread acclaim through her participation in the ongoing season of “Cooku with Comali”. Days ago, a meme fest took place in Internet based on an attire she donned for a particular episode. The actress who is pretty much active in social media platforms, earned a separate fan base through her stint in Bigg Boss show.

On Wednesay, Manimegalai came up with a philosophical post in her account and impressed many of her 18 lakh followers. “Owning an Audi car doesn’t define your wealth but Living a life without visiting hospitals does” Manimegalai wrote in her post and said that she got impressed while reading it recently.

Manimegalai also said that she met with a minor accident recently and will miss next two weeks of Cooku with Comali. She also wanted people to be careful while handling hot water.

Previous article“I Can’t Believe You” Popular Film Producer On Prashanth’s Accusation Against DMK !!
Next article“Is This A Question Asked To A Legend ??” Internet Slammed Popular Youtuber For His Attitude Towards Kamal Haasan !!

Julie Hits Back At The Abusers In Social Media !! “Am I Not Your Sister ??” She Asks In Anger !!