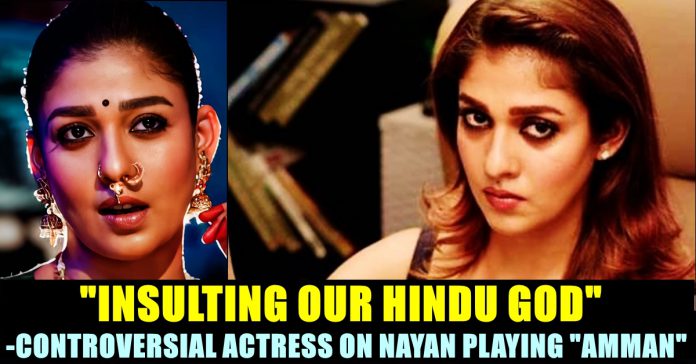 Mookuthi Amman of Nayanthara and RJ Balaji is going to be released in Disney plus Hotstar from the Diwali day which is on 14th of November. Promotional activities from the film crew have been started and first single was released on Monday. Days before trailer of the film released and suggested people that the film is going to be about the fake godmen of our country.

In “Mookuthi Amman”, Nayanthara is going to play the role of a Tamil goddess. The film’s plot revolves around RJ Balaji who plays an ordinary resident in Nagercoil and his family. What happens when “Amman” enters his family which consists a Mother and two sisters, is what “Mookuthi Amman” is going to serve its audience, suggests the trailer.

As a part of the film’s promotional activity, on Monday, RJ Balaji released the first single from his film titled as “Aadi Kuththu”. Prior releasing, Balaji posted a tweet asking his followers whether they are ready for the single. Check his tweet below :

On seeing this tweet from Balaji, Meera Mitun, a controversial Tamil actress who is known for her baseless accusations against top-tier celebrities of the Tamil film industry, posted a tweet questioning why Nayanthara is doing the role of “Amman”.

Mentioning her past relationships, She said that these kind of things would happen only in Tamil nadu and also wanted tamil leaders to open their mouth.

A woman in relationship with a married man is doing the role of our hindugod "Amman",does she even know who "Amman" is ?!All this nonsense shameless casting insulting our hindu god happens only in tamilnadu by these worthless #kollywood people.Won't tamil leaders open mouth now https://t.co/C6syIWOGoG

This tweet of her didn’t o well with the users of twitter who said that acting has nothing to do with personal character. “Anyone can act in the movie, acting in the role of God is a challenging one and it’s nothing shame for Hindu community. We know the difference between Entertainment and Devotion. Please Grow Up” said one of a follower.

Anyone can act in the movie, acting in the role of God is a challenging one and it's nothing shame for Hindu community. We know the difference between Entertainment and Devotion. Please Grow Up 🤣

#LadysuperstarNayanthara already given a nice response for all these kind of shitty minded people's comments via her performance as "seetha" in the film "Ramarajyam" years before so you just shut..sit nd kadharify as much as you can😂 #mentalmitun😂

Unaiya amman role potta matum ena agum vilangidum. First check urself whether u are right and have right to speak abt others.