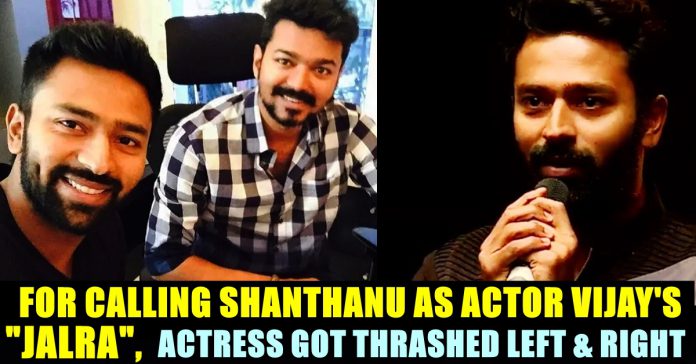 For denying to state his opinion on the controversy being deliberately created by Meera Mitun, the former Bigg boss contestant made defaming comment against actor Shanthanu. On seeing her atrocial tweets and videos online, one of a follower of actor Shanthanu asked the actor to state his opinion to make her shut. Shanthnu, knowing about her strategies to gain popularity, asked his follower to ignore and avoid. Shanthanu said that talking about her will gain her the publicity she is craving for.

“Nanba the more u talk , the more publicity ! Ignore and avoid” the actor said in his reply tweet.

On seeing Shanthanu’s tweet, Meera Mitun made a mindless accusation against the actor saying that he got his opportunity to act in Vijay’s Master through influence.

I know doing more and more JALRA , CHAMCHAGIRI got you a chance in #Master even after ur dad tried to promote you 👏 Keep doing JALRA to @actorvijay 🤣 https://t.co/0cwtNuO7OC

This tweet irked the fans of both Vijay and Shanthanu who came up with reply tweets extremely abusing her.

Please have a psychiatrist consulting, I think you are in depression. I really feel pity on you lady. #Master https://t.co/stRbqvsQln

You are a big disaster …..😂😂😂
I know why you are targeting them. Only to get chance from their haters in a negative way. but one thing if you have talent you can get chance 💯 but you display that you are very lazy and not a hard worker itself…..😂😂😂#Master

Followed by actress Kasthuri Shankar, Model Sanam Shetty, Vignesh Karthik and few other familiar personalities who slammed Meera Mitun for constantly making derogatory comments against actor Vijay and his wife, fans started trending hashtag against her in the micro blogging social media site. Meera Mitun, a model and former Bigg Boss contestants has been making derogatory comments against top-tier actors of Kollywood, is currently facing the wrath of the fans who are abusing her with extreme bad words.

She said that actor Vijay is a product of Nepotism and his fans are uncivilized. Alleging that the actor’s last two films became utter flop, Meera Mitun claims that she is more successful than Vijay and any other actor in Kollywood. At one point, she went far beyond the limit and started intervening in the personal life of the actor which made fans to verbally abuse her.

Actress Amala paul who predominantly appears in Tamil films, replied to an adult page in Instagram and her instant reply is going viral among...

As schools reopened in Karnataka, a number of videos of school students being forced to remove their hijab by teachers at the gate are...