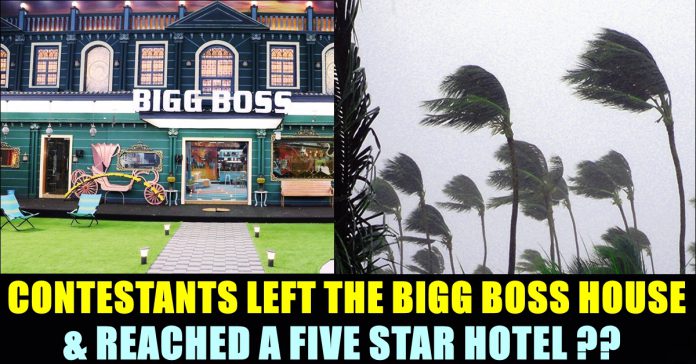 The impact created by “Cyclone Nivar” across the state Tamil nadu is huge. Many parts of the capital and Kadalur district didn’t have electricity since the noon of Wednesday. Precautionary measurements were activated by the government and the authorities are working on full swing to bring the situation to normalcy. Meanwhile, a report has surfaced saying that the contestants of the ongoing Bigg Boss show had been moved to a different place due to the flood caused by the heavy rain in Chennai.

The artificial set of Bigg Boss house is located in EVP film city of Poonamallee which is few kilometres away from the Chembarambakkam lake. According to Vikatan, contestants, on seeing the uninterrupted rain water flooding into the house, decided to leave the Bigg Boss house once and for all. However, the organisers immediately moved all the contestants in four cars to a five star hotel which is located in Poonamallee.

Bigg Boss is currently running with highest viewers due to the interesting tasks being provided by the management. Now, due to the heavy rain caused by the Nivar cyclone, the Bigg Boss premises that is located in the EVP film city got surrounded by water. Garden area and swimming pool got flooded through hip deep water, reported Vikatan.

The uninterrupted heavy rain and the announcement of Chembarambakkam water release caused a restlessness among the contestants, says reports. Some of the contestants who got terrorized requested the Bigg Boss management to send them from the show once and for all. “We are walking out of the show, spare us” they said according to Vikatan.

However, the management immediately made an arrangement to make them stay in a five star hotel that is located in Poonamallee. Around 4 PM on Wednesday, the contestants were travelled in four cars with tight security to the hotel. They were staying in the hotel during the whole night and the process of removing the water from the set is currently underway. The contestants are expected to enter the house again on Thursday night.

Due to this situation, the channel is planning to telecast some of the incidents that took place in the house earlier for today and tomorrow. As the chances of another cyclone and heavy rain are slim, the weekend episode of Kamal Haasan is expected to take place as per plan.

However, a popular twitter user Imadh who is known for providing the inside informations of Bigg Boss show, said that the contestants left the house only for four hours due to the draining process.

Contestants are taken out for just 4 hours due to clearing/renovating the house as it was very slightly flooded.
They will be back in few hours.

As outside Camera's are safeguarded, yesterday content was slightly affected. Show will continue.#biggbosstamil #Biggbosstamil4 https://t.co/R2LnxLxv2G

No one was allowed to talk to anyone. It was perfectly monitored and all are isolated seperately and not as a group.

So far Rekha, Vel Murugan, Suresh Chakravarty and Suchithra got eliminated from the show due to the less votes they received from the audience. Ajeedh got evicted and saved himself by using a pass he won during a task. As far as the ongoing week is concerned, Som Shekar, Balaji Murugadoss, Aari, Jithan Ramesh, Anitha Sampath, Sanam Shetty and Aranthangi Nisha were nominated. Anitha won the topple card introduced by Bigg Boss and nominated Samyuktha by using it.

Indian Premier League (IPL) of 2019 is not only full of exciting matches but also is lined up with many controversies and infamous comments...

Sivakarthikeyan, "Don" of whom released in theatres on Friday, imitated popular reviewer "Blue Satta" Maaran while giving an interview to a YouTube channel. The...