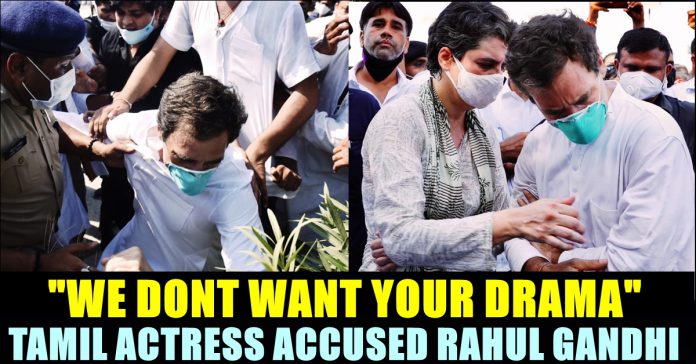 When Congress leader Rahul Gandhi and his sister Priyanka Gandhi tried to visit the family of the girl victim who died on Tuesday, they were detained for violating a ban on large gatherings. Visuals showed the Congress MP being pushed and shoved as he tried to resist the police. In the clash, the 50-year-old was seen falling to the ground. Other Congress leaders helped him up. They were stopped from marching on the Delhi-Noida highway on their way to Hathras to meet the victim’s family.

“Why are you arresting me? What are the grounds for the arrest? What law am I violating,” Rahul Gandhi said in a heated exchange with policemen, who said that they were charging him with “Section 188” – a law on defying official orders.

Earlier, Rahul said “I am standing here peacefully. I will go alone then. I will walk alone from here to Hathras,” to the Police. When their vehicles were stopped at Noida, Rahul and Priyanka got off their car started marching with the Congress workers. Immediately, a large contingent of UP policemen blocked their way and tried to push them back

This incident created huge outrage across the country as the visuals showed the political leader falling down after being manhandled by the Police. Several people including the political parties slammed the act of UP Police who are responsible for the arrest of the culprits.

Watch the videos and reactions below :

UP Police is acting like personal mafia of Fanta Baba

Now in this "democracy" it's not even allowed to walk. pic.twitter.com/cmukk83xDz

The Show Down between Mr @RahulGandhi and #UttarPradesh police …

This happened after he fell …

Mr Gandhi got up and marched on… pic.twitter.com/wSx4NIA3PL

Reacting to this incident, actress Gayathri Raguramm of BJP party, posted tweet saying that Rahul gandhi is doing drama. She asked the leader to make a personal visit instead of political visit. She further said that Rahul Gandhi’s drama and self sympathy is not needed. She also accused the leader of overshadowing the real issue.

“Dear Rahul Gandhi make a personal visit don’t make a political visit. The family is grieving in pain that they lost their daughter. We don’t want ur drama self sympathy that ur arrested and overshadowing a real issue of rape victims. #Balrampurcase #Harthacase CM looking into this” her tweet read.

Dear @RahulGandhi make a personal visit don’t make a political visit. The family is grieving in pain that they lost their daughter. We don’t want ur drama selfsympathy that ur arrested and overshadowing a real issue of rape victims. #Balrampurcase #Harthacase CM looking into this https://t.co/fLQHXv1LWR

Ahead of the Congress leaders’ planned visit, the UP administration this morning enforced a ban on large gatherings and put up barricades at the borders citing the coronavirus. Roads to Hathras were also blocked. Comment your views on this incident !!