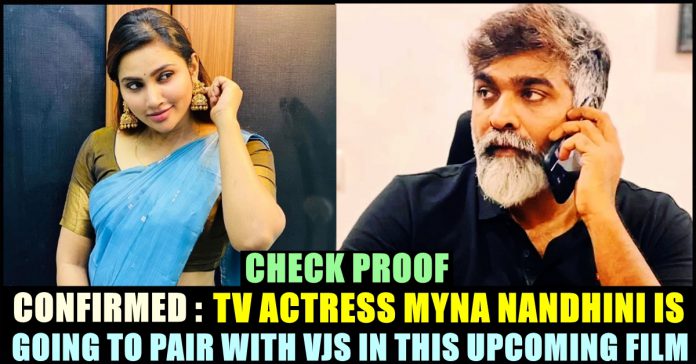 Television actress Myna uploaded a picture with director Lokesh kanagaraj in her official Instagram handle and confirmed the buzz that was doing rounds for past few days about herself pairing with Vijay Sethupathi. It has been reported that Shivani, Myna and Maheshwari of Vijay TV fame are going to act with the top-tier actor as his three wives in the upcoming film “Vikram” which is one of the most anticipated films of the year. As soon as Myna uploaded the picture, it was going viral across social media platforms with various kind of reactions.

Not many days ago, it was reported that Shivani of Bigg Boss fame is going to pair with Vijay Sethupathy in the most anticipated “Vikram” which is being directed by Lokesh Kanagaraj under Kamal Haasan’s Raajkamal Internationals. While fans are raising their eye brows on knowing about the 20 year old inexperienced actress pairing up with Vijay Sethupathi, another eport emerged saying that two other famous TV stars namely Myna and Maheshwari are going to pair up with the “Vikram Vedha” star.

It is undeniable that Kamal Haasan- Lokesh Kanagaraj’s “Vikram” is one of the most awaited films in Tamil film industry post COVID 19 pandemic. The film’s title teaser which got released on the 66th birthday of the “Ulaganayagan”, became a huge hit among fans and created a huge expectations among them. The teaser has garnered 25 million plus views in youtube so far.

Most recently, first look of the film got released on Internet, containing Kamal Haasan, Vijay Sethupathy and Fahad Fazil in the poster. Lokesh didn’t give much through the poster as it contained the close up pictures of the three seasoned actors. As far as the casting of the film is concerned, along with the three top tier actors, Anjathe fame Narain, Kalidas Jayaram, Arjun Das and Antoney Varghese of “Jallikattu” fame are expected to be featuring in the film.

Lokesh who is known for making a hit movie without casting a lead actress, hasn’t made any official confirmation about the female actress who are going to act in the film yet. However, a strong buzz saying that Shivani is going to act in the film as Vijay Sethupathi’s pair surfaced recently. Recently, another report of emerged saying that Vijay TV actress Myna Nandhini and popular video jockey Maheshwari are going to act as Vijay Sethupathi’s pair.

Now, Myna confirmed her role in “Vikram” by uploading a picture of herself with director Lokesh Kanagaraj in her official Instagram account. “Happy to work with you jiii @lokesh.kanagaraj ❤️❤️😍” read the caption of her post.

Check out some of the reactions surfaced in Internet for the unexpected casting of Lokesh kanagaraj :

Previous articleWhen Yuvan Opened About Why He Entered Music Industry !! MUST WATCH
Next articleFather Sexually Harassed His Own Daughter After Intoxicating Her With Drugs!! Arrested

“Not Rajinikanth, Vikram Is The Superstar” Says This BIGG BOSS STAR !!

Known for her controversial statements, Meera Mithun came up with a new tweet alleging that actor Vikram is the Superstar of Kollywood film industry,...

Every time she tweets a post, people storming into her comment section only to make fun of her. Irrespective of the trolls Julie keeps...

In Coimbatore's Sundarapuram Area, Periyar statue got desecrated by some unidentified people in the early hours of Friday. It has been discovered that few...