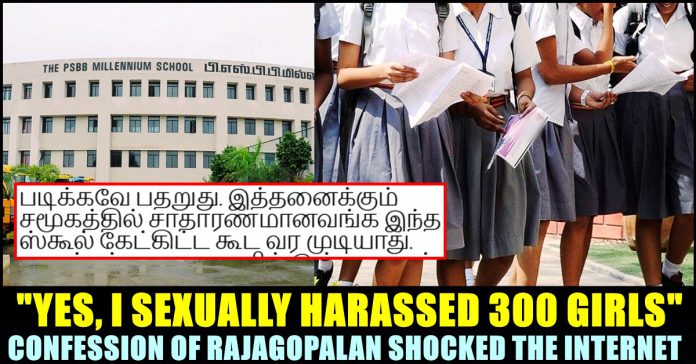 After the arrest, updates on the case regarding the faculty of PSBB named Rajagopalan harassing female students has been surfacing in daily basis. The latest report that emerged about the confession he made has shocked the users of social media. He reportedly confessed about sexually harassing 300 female children in the past 10 years and said that he got caught only after appearing half-naked during an online class. As soon as the news broke out, people started criticizing the management and questioned about the steps they took for the safety of the female children of the school. Rajagopalan said that the school management didn’t take appropriate action against him when students raised complaint, according to a report of Dinakaran daily.

To our shock, Rajagopalan accepted about impregnating some of the students by threatening them with their videos and aborting their fetus. Rajagopalan of PSBB got arrested under POSCO and other relevant acts for sexually harassing female students after a number of former and current students raised complaints in social media. The school management which reportedly failed to co-operate the Police officials initially, suspended him after a outrage broke out in social media. Ever since the arrest was made, many other accusations are being made against teachers and other school managements.

Initially, it was reported that Rajagopalan passed obscene comments at female students, invited one of them to go movie with him, visited class by wearing towel and was involved in several other insensitive acts that disturb students mentally. However, during the police interrogation, more shocking truths about his illicit behaviour came to light. Other faculties of the school who are involved with him were also got arrested by the Chennai cops.

Now, as far as the latest report regarding the confession of Rajagopalan is concerned, Assistant Commissioner of T. Nagar Hari Haran Prasath, Children and Women crime prevention department officer Jayalakshmi and the Police officers of Ashok Nagar All women Police department has been investigating the accused.

While talking to media about the third day investigation, Police officials said “Rajagopalan has accepted harassing the female students sexually by sending obscene messages to them in Whatsapp and about receiving their private pictures. He also accepted threatening them by showing those pictures during special classes and sexually harassing them. He even confessed about taking some of the students to cinema theatres and hotels and about introducing them to other faculties”

Rajagopalan confessed about sexually harassing 300 plus students in the past 10 years. He also made a statement on impregnating few students and aborting the fetus of them by providing tablets without the knowledge of their parents. “I got caught red handed while appearing in an online class by wearing a towel” said Rajagopalan in his 100 page confession.

After three days of investigation, Police officials presented Rajagopalan in a POCSO special court. Justice Moahammad Farook ordered to keep him in the jail under the court custody till the 8th of June, followed by which Rajagopalan was sent to jail once again. The confession of the accused shocked the users of Internet who are following the updates about the case keenly since the arrest was made.

In an unexpected turn of events, a family in Sydney, Australia, became the first to win 60 years worth of pizza after meeting the...